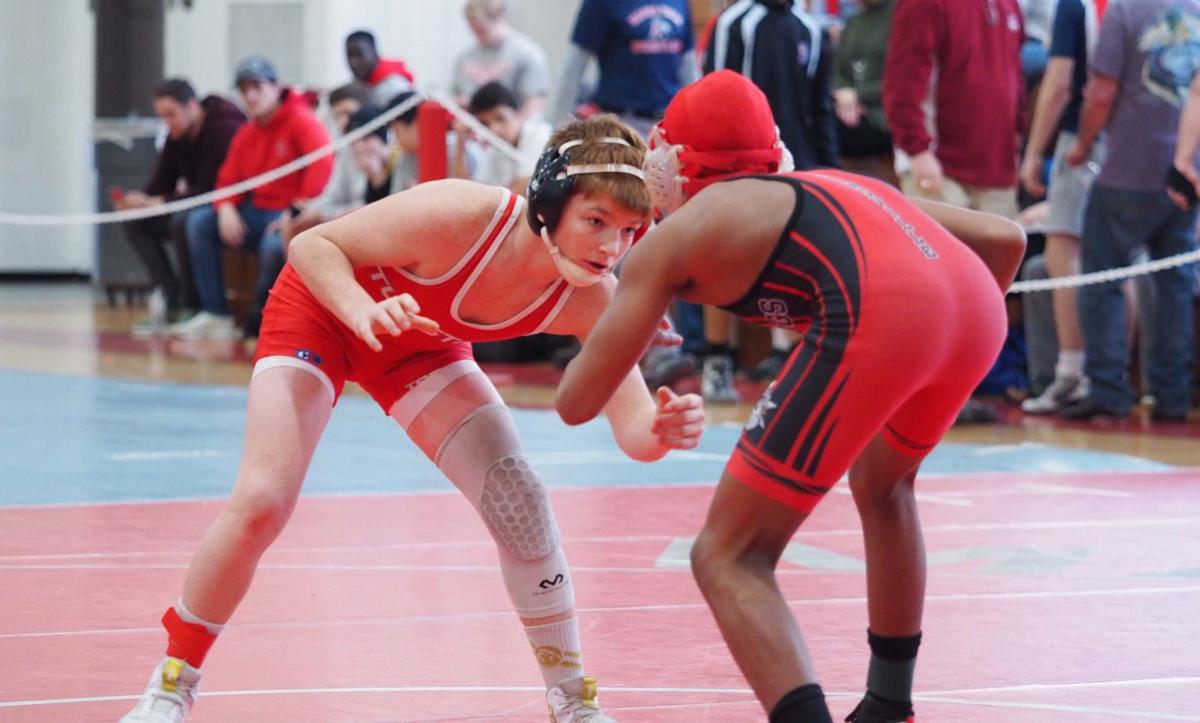 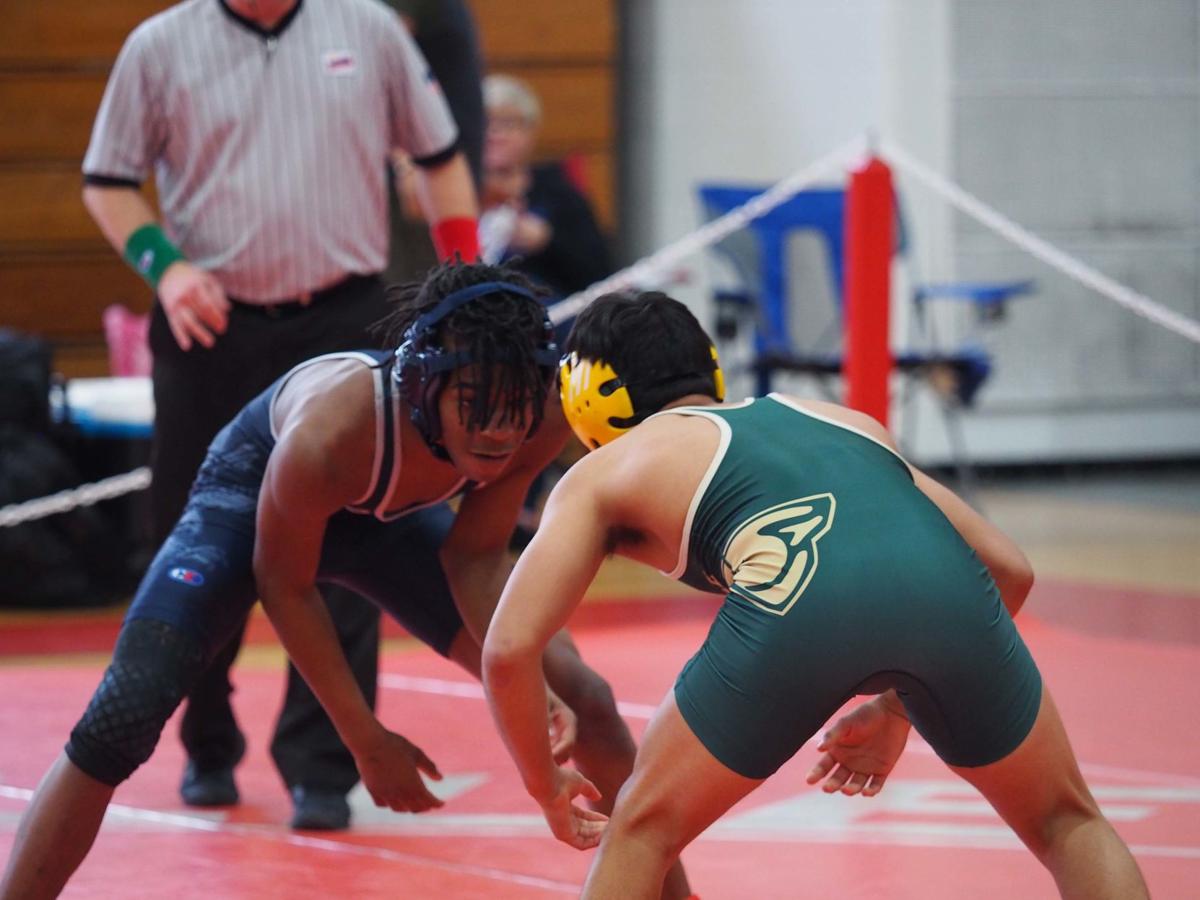 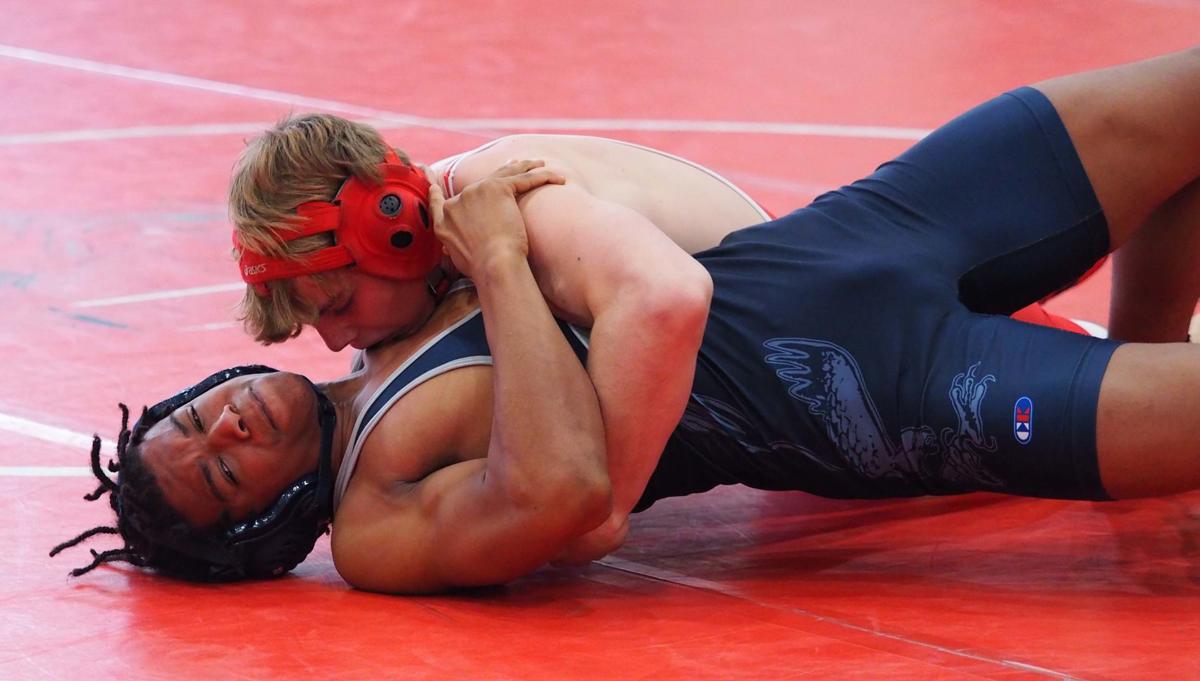 With eight wrestlers finishing in the top four of their weights and landing on the podium, Magna Vista paced the field with 148.5 points. Bassett, with four champions and five other placers, finished in second place with 130.5 team points. Patrick County placed a close third with 128.5 points. George Washington (86.5) placed fourth, Tunstall and Halifax County tied for fifth (60) and Martinsville (56) was seventh.

George Washington senior Chestley Hargrove placed second at the Piedmont District championships in each of the last three seasons in his weights, but he finally broke through Saturday by winning at 138 pounds win a pin in 1:50 against Trey Robertson of Patrick County.

“Winning is something I knew I was going to do, but to see myself progress and grow the way that I grew, it made me very proud to know that I’m accomplishing something instead of repeating the same stuff,” Hargrove said.

“We’ve got a lot of young kids. I think Kirby, Adkins, they’re stepping up in the practice room and they’re getting better out here on the mat,” GW head coach Jason Medlin said. “A lot of it too is our confidence — wrestling all these matches and getting their confidence up.”

Tunstall’s Santanna Keatts (106 pounds) and Cade DeVivi (170) earned the Trojans’ only individual titles of the day.

“It feels good, and I can say I’m the champion of my district,” said Keatts, a freshman. “I just want to accomplish more. … I definitely need to get my stamina up and practice the moves that I’m not really strong at.”

Magna Vista head coach Zeak Ca’Stle said the team’s championship was the product of his team working hard to improve over the course of the season.

“Usually over the Christmas break, a lot of teams lose their edge. We stayed in the room and worked hard and didn’t lose our edge,” he said. “I knew coming in that we could win it if we had a bunch of pins and some places.”

“We started off kind of slow [this season], but we worked hard and got better and better,” Ca’Stle said. “[Assistant coach] Hugo Hughes, he does a great job of conditioning the kids, and that made a big difference as far as us being on the podium versus not being on the podium.”

Perhaps the most surprising champion of the bunch was Zayvion Estes, a sophomore in his first year of wrestling. He pinned Bassett’s Ricky Penn in 3:20 to place first.

“I’d wanted to do it for fun because it’s my brother’s senior year and he wanted me to come out and do it with him, so I did it and I worked hard,” he said. “It’s really fun. I didn’t like it at first, but I like it now. I’m starting to love the sport.”

Ca’Stle was named the Piedmont District’s Coach of the Year, and Phillips, who tallied a pin and a major decision on Saturday, was named Wrestler of the Year.

“Bassett’s come a long way,” said Preston, a senior. “Our coaching staff and all the new type of styles of wrestling that our coaches have brought, they’ve really helped us out a lot in different ways — on the mat, off the mat.”

“I knew my strengths, and I knew where I needed to get him,” Preston said. “I came here with something to prove. Just wanted to let people know that Bassett’s still got it.”

“I’m pleased with the effort we’ve given this year and the improvements we’ve made since the first day,” Lawson said. “I think we have a good chance of getting a good number of kids out of the regional and into states.”

Alfredo Gutierrez (120 pounds) and Owen Smith (132) earned Piedmont championships for the Cougars. Seven other Patrick County wrestlers wound up on the podium Saturday.

“We have 10 guys that have one 20 or more matches this year,” Lawson said. “I’m just hoping they stay with it and work hard.”

Parker Cotton is a sports reporter at the Martinsville Bulletin and Danville Register & Bee.You can reach him at (276) 638-8801 ext. 215. Follow @ByParkerCotton.