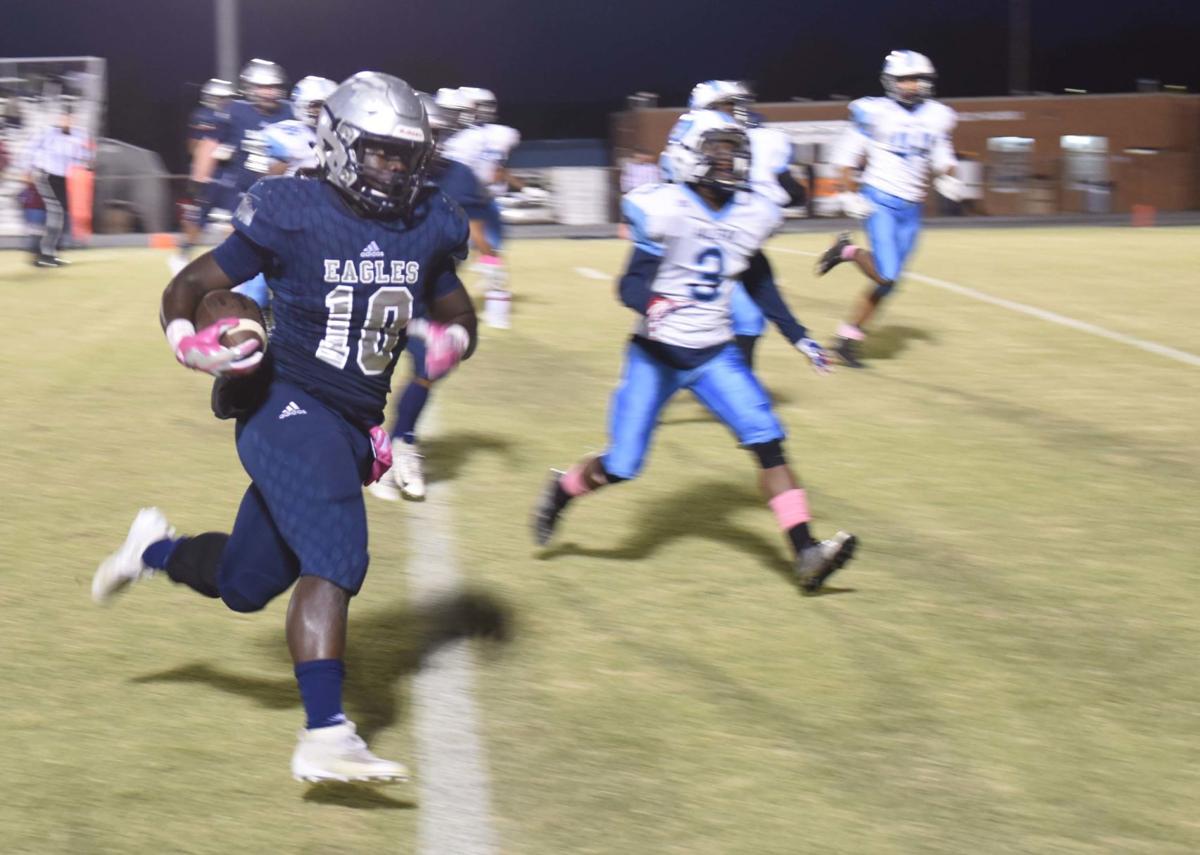 George Washington senior running back Wesley Graves carries the football on a 26-yard touchdown run during the first quarter of Friday's game against Halifax County. 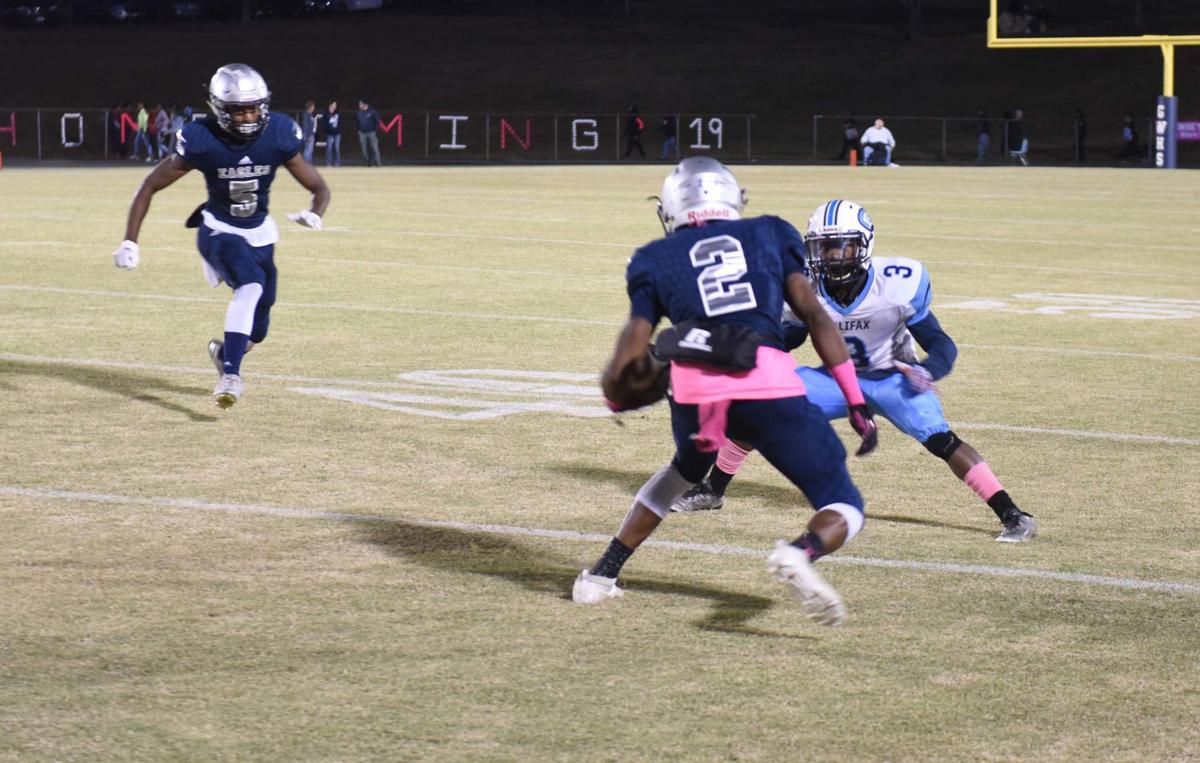 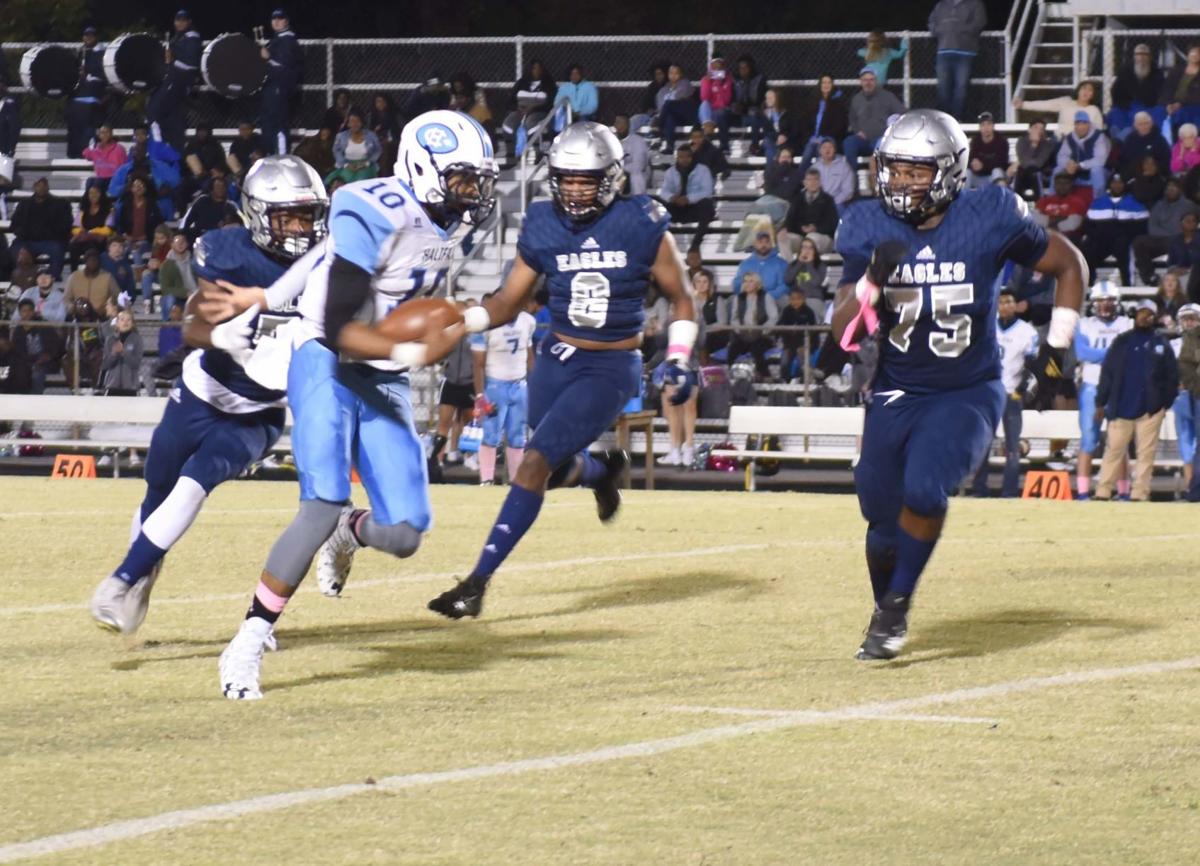 George Washington senior running back Wesley Graves carries the football on a 26-yard touchdown run during the first quarter of Friday's game against Halifax County.

The carry went in the stat sheet as a 77-yard touchdown run, but Wesley Graves’ second score of the evening also cemented his place in the record books.

After the Comets punted on their first possession, Graves took his next carry the distance to register the 60th touchdown of his career and give the Eagles a 14-0 lead in what would ultimately become a 62-27 victory at George Washington High School.

“It means a lot,” Graves said. “It means that hard work pays off. And all that working hard in the morning, weightlifting and all the coaches pushing me, it means a lot.”

Wilson’s final season at GW was in 2008, and he went on to play at Virginia Tech and then two years in the NFL, making him an athletic role model of sorts for football players in the Danville region.

Graves said he still trails Wilson in rushing yards, but he’s got his eyes set on that record next.

“I know my line’s got me, so if there’s a chance to get there, they’ve got me,” Graves said.

Graves went on to add to his tally on Friday, rushing for a 2-yard score in the second quarter, a 30-yarder in the third and a 40-yarder in the fourth.

“The guy is second to none. We’re so fortunate to have a player like that on our team,” Eagles head coach Nick Anderson said. “His work ethic is unreal.”

Both teams entered with identical 2-0 records in the Piedmont District, but the Eagles (5-2 overall) remained at the top with a hand from Graves and two timely touchdowns from Shawn Watlington.

His first came in the waning seconds of the opening half, after teammate Ahmad Poole intercepted Halifax County quarterback Thomas Lee. With four seconds left to play, GW clung to a 21-14 Lead and elected not to kick a field goal. The move paid off as Sha’Kobe Hairston found Watlington for a 12-yard pass with less than a second remaining.

“It was critical that we got in the end zone,” Watlington said, “but coach trusted our offense, our quarterback, and we made a good play.”

Watlington’s second score came via an 80-yard interception return in the final minute of the third quarter, halting a Comets drive that had entered Eagles territory.

Hairston also found Zavion King for a 55-yard score in the third quarter.

“We’ve got a season goal every year of a district championship,” Anderson said, “and it’s something we have a lot of pride in. We told the guys this was one notch we had to take care of in that ladder to get to the championship.”

Aside from Lee’s interceptions, the Comets (5-2 overall) managed to move the ball well against GW.

Mikyler Smalls scored on a 1-yard rush in the second quarter, and Christian Mack caught two touchdowns, 6- and 55-yarders in the second and third quarters, respectively. Traivius Chappell’s 12-yard score in the fourth completed Halifax County’s scoring, however.

A 5-yard rushing touchdown from GW’s Willie Edmunds Jr. with 1:33 to play provided the final margin.

On a night that senior offensive tackle Tyler McDuffie was also named homecoming king, there was certainly plenty to celebrate for the Eagles.

Anderson gave Graves the responsibility of leading the postgame cheer, and Graves was lifted onto the shoulders of his teammates.

For a night, this homecoming has two kings.

“I’ve been playing with [Graves] since middle school,” Watlington said, “and it’s exciting. He comes out here and gives it his all in practice Monday through Thursday, and on Friday he comes out and puts on a show for the people. Everything he do, he does for the team. He never takes any credit. He’s a great team player.”