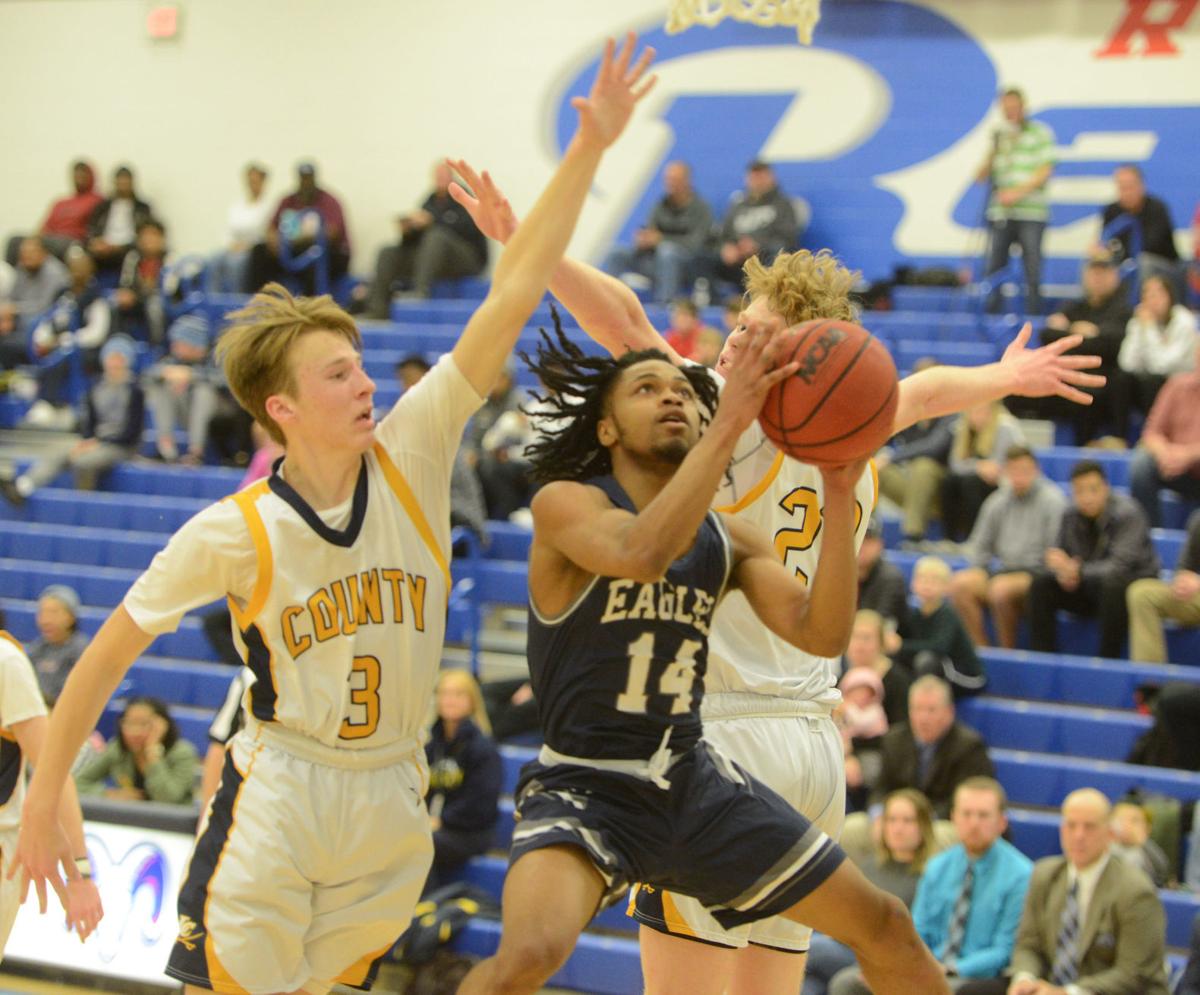 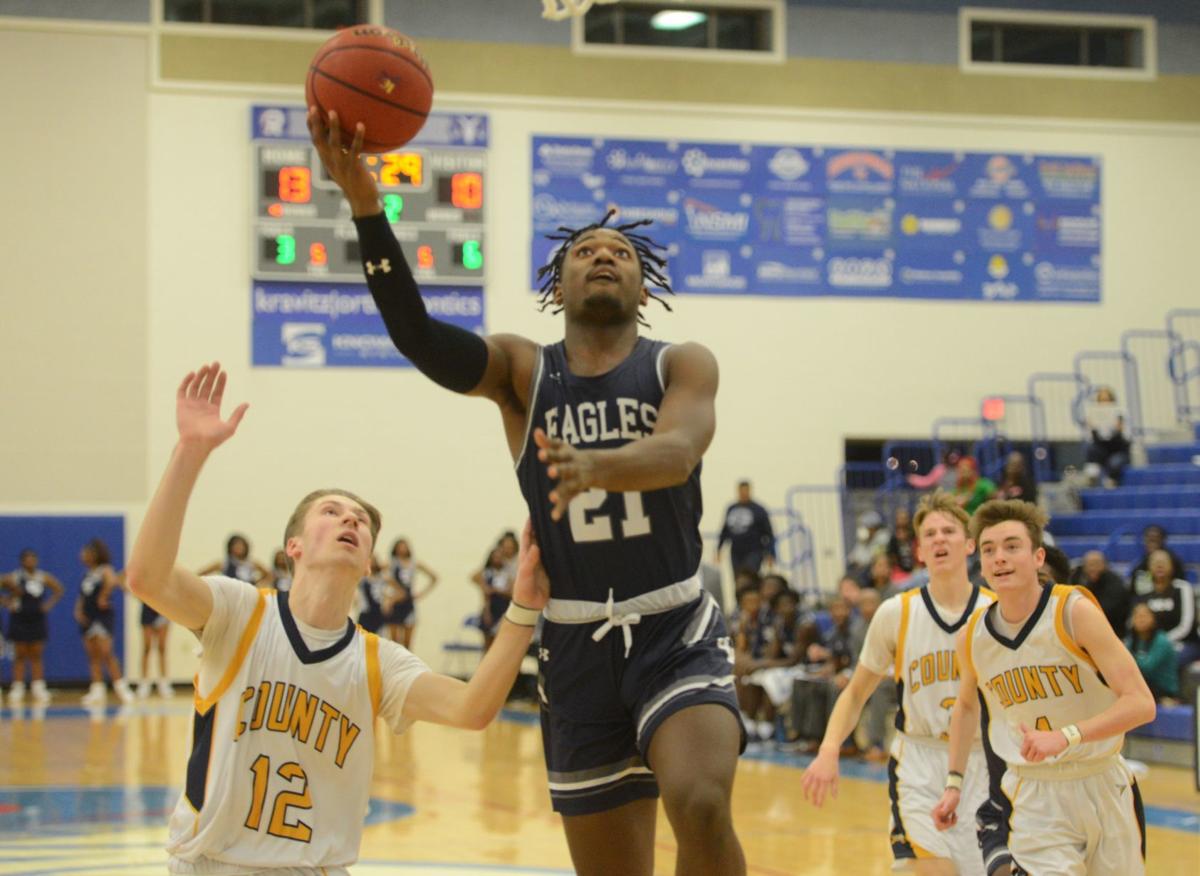 George Washington junior forward Sha'Kobe Hairston attempts a layup against Loudoun County on Friday during the quarterfinals of the Class 4 state tournament at Riverside High School in Leesburg. 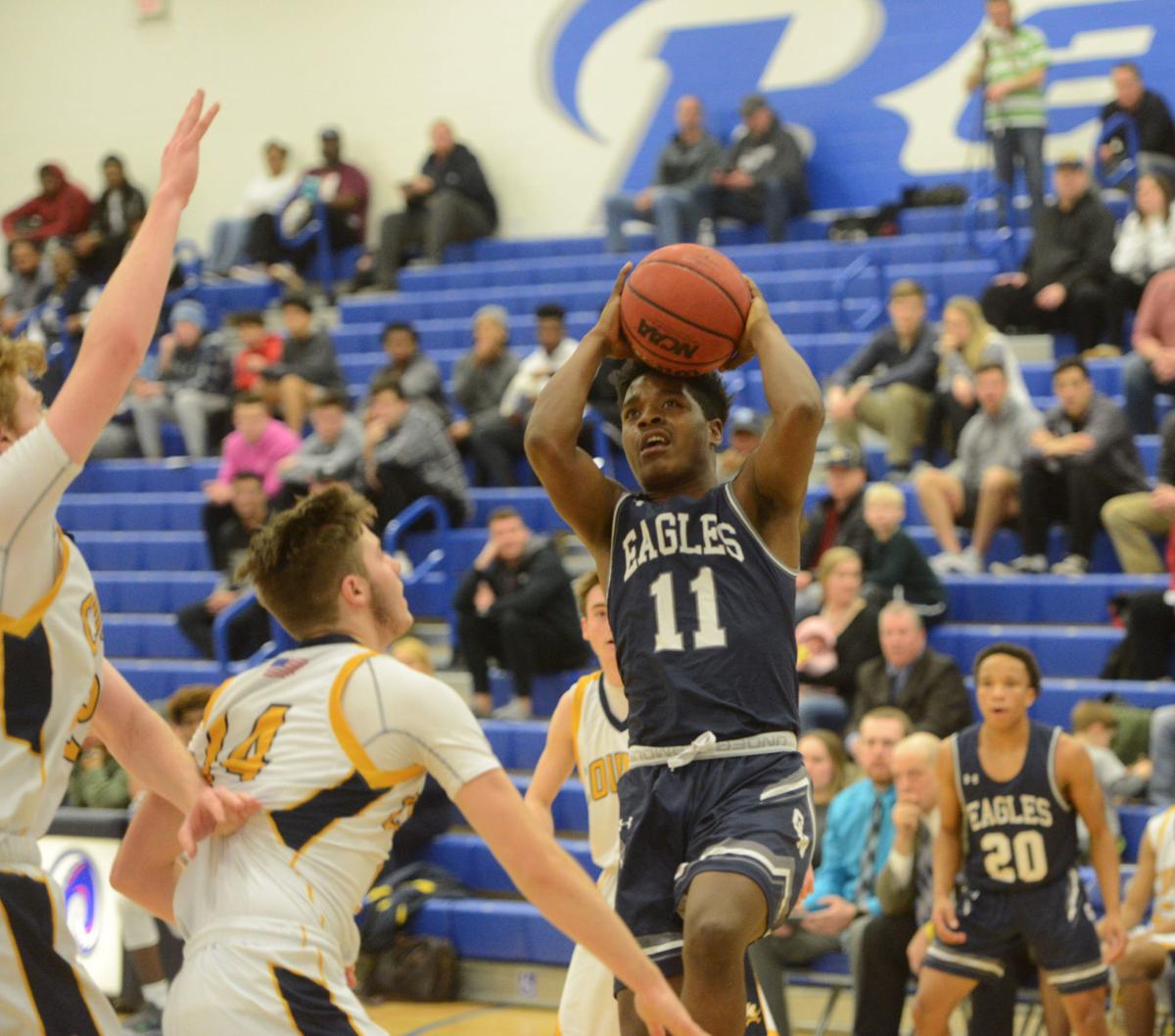 George Washington senior guard Brad Price attempts a jumper in the lane during the first half of Friday's Class 4 state tournament game against Loudoun County at Riverside High School in Leesburg. 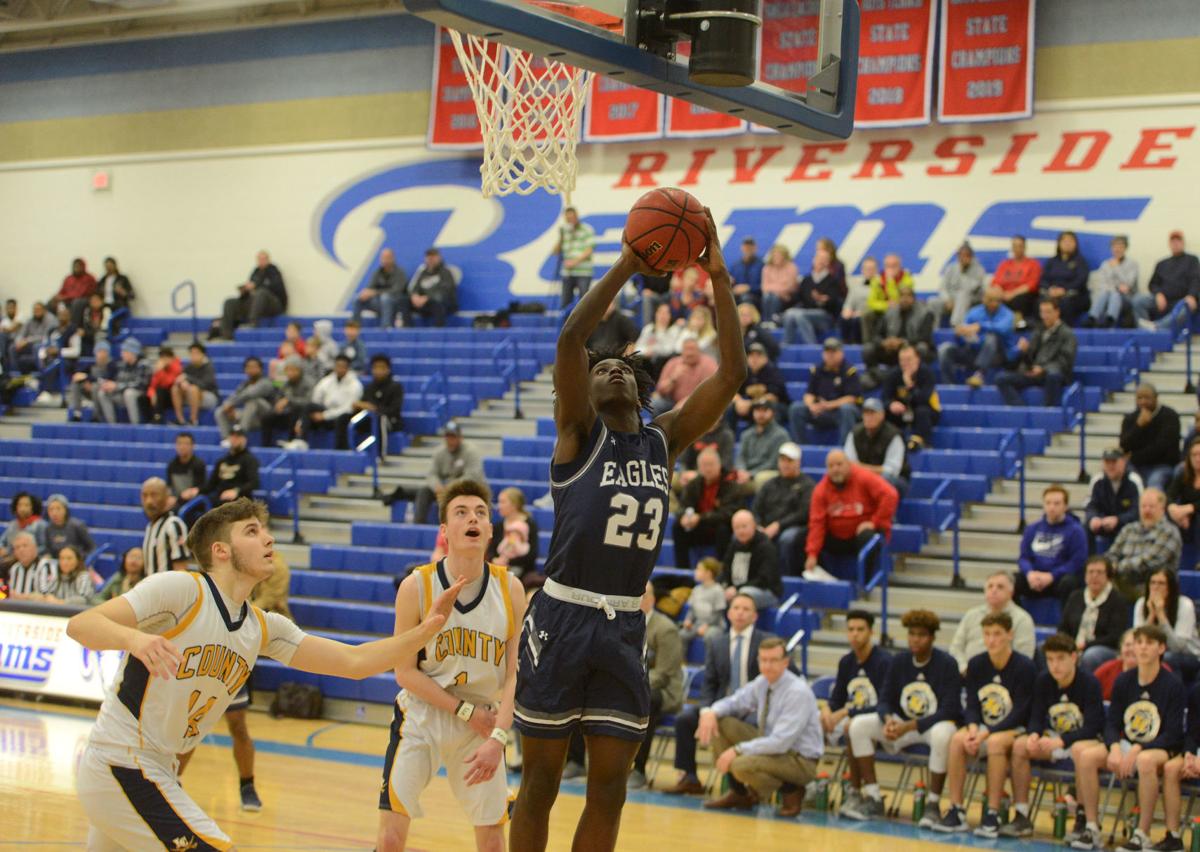 George Washington junior forward Sha'Kobe Hairston attempts a layup against Loudoun County on Friday during the quarterfinals of the Class 4 state tournament at Riverside High School in Leesburg.

George Washington senior guard Brad Price attempts a jumper in the lane during the first half of Friday's Class 4 state tournament game against Loudoun County at Riverside High School in Leesburg.

LEESBURG—On Friday at Riverside High School, a stone’s throw away from the Potomac, the George Washington High School boys basketball team found the end-of-game execution that had eluded it one week prior in a gym 240 miles away.

Holding a five-point lead with 50 seconds remaining against Loudoun County High School in the Class 4 state tournament quarterfinals, the Eagles successfully defended their lead by going 6 for 6 from the foul line in the final 41.6 seconds to claim a 63-55 victory over the Raiders.

The score and time situation were reminiscent of the Region 4D Tournament championship game against Halifax County, when GW was unable to take care of the ball and run out the clock before ultimately suffering a two-point defeat.

The Eagles, having learned from that mistake, delivered on Friday by hitting 10 of 13 free throws in the final quarter.

“I told the guys, ‘We’re not ready to do the same thing we did last time,’” GW head coach Jermaine Parker said.

The win sends the Eagles (21-9) to the state tournament semifinals, where they will face King’s Fork, the Region A champion, on Tuesday. The location for that game was not available late on Friday. The Bulldogs (23-3), based in Suffolk, defeated Monacan High School, the Region B runner-up, 66-62 on Friday to advance.

A layup from senior guard Brad Price gave the Eagles a 52-50 edge, but Raiders senior guard Matthew Anderson tacked on a pair of free throws to even the score once again.

GW went ahead for good on a converted three-point play from senior guard Taevon Walden, which came at the end of a frantic possession that twice saw the Eagles save the ball from going out of bounds. After a defensive stop, Price Euro-stepped his way through the lane for a floater that gave GW a 57-52 advantage.

From there, Walden hit four straight free throws on two separate trips to the line, and sophomore forward Donavan Howard added a pair for himself. Loudoun County only got a 3-pointer from Luke Brenner in the final minute, but it was not nearly enough.

“I was 100 percent proud of the guys because that’s something we worked on,” Parker said of the foul-line performance.

Walden heard some jeers from the Loudoun County student section after he air-balled two shots in the first half, but he finished with 15 points. He hit a 3-pointer at the third-quarter buzzer to bring GW to within one point, at 39-38, and he scored eight points in the final eight minutes—all at the basket directly in front of the rowdy section.

“Them going against me made me feel like I was doing something, so I had their attention,” Walden said. “It made me play a little bit better.”

Matching Walden for the team-high in points was junior forward Sha’Kobe Hairston, who hit seven shots from the field mostly after backdoor passes or offensive rebounds found him underneath the basket.

“Anything to get a ring,” Hairston said. “We just had the same feeling that the guys had last year—just everybody puts their all in and just doing what I can.”

In all, it was one of Hairston’s finest outings of the season.

“Coming off of football he was a little rusty,” Parker said of Hairston, GW’s quarterback in the fall, “and I told him, ‘They protected you from getting hit. Nobody wanted to hit you in practice, but in basketball, you’re not going to be protected that way. You’ve got to get physically stronger, you have to be mentally tougher to play the game.’ And he has improved tremendously over the period of time as far as his confidence coming up. He’s hitting the boards and being smart.”

GW and Loudoun County fought to a 23-23 draw at halftime—the Raiders winning the first eight minutes 13-10 and the Eagles winning the second quarter by the same margin.

Eagles senior guard Kapone Barley hit a pair of free throws to break the seal on the second half, but Loudoun County answered with eight straight points to take a six-point lead. In that stretch, Anderson hit a floater and a pair of free throws in between a layup from Caleb Rexroad and a Brenner bucket.

To close the quarter, Hairston scored twice, Justin Bethel hit a 3-pointer, Price knocked down two free throws and Walden hit his 3-pointer to ensure Loudoun County only went to the fourth ahead by one point.

Price finished the game with 10 points, Bethel had seven and Howard scored six.

Anderson led all scorers with 21 points, and Brenner backed him up with 14. Mark Siegel, who hit five 3-pointers and scored 19 points in the Raiders’ win against Millbrook in the Region C Tournament championship game, was limited to just eight points against GW.

“They hit some 3s, that’s what they do,” Parker said, “but the guys were able to contain and contest and do the smaller things—rebounding and pushing the ball—so I was proud of them for that.”