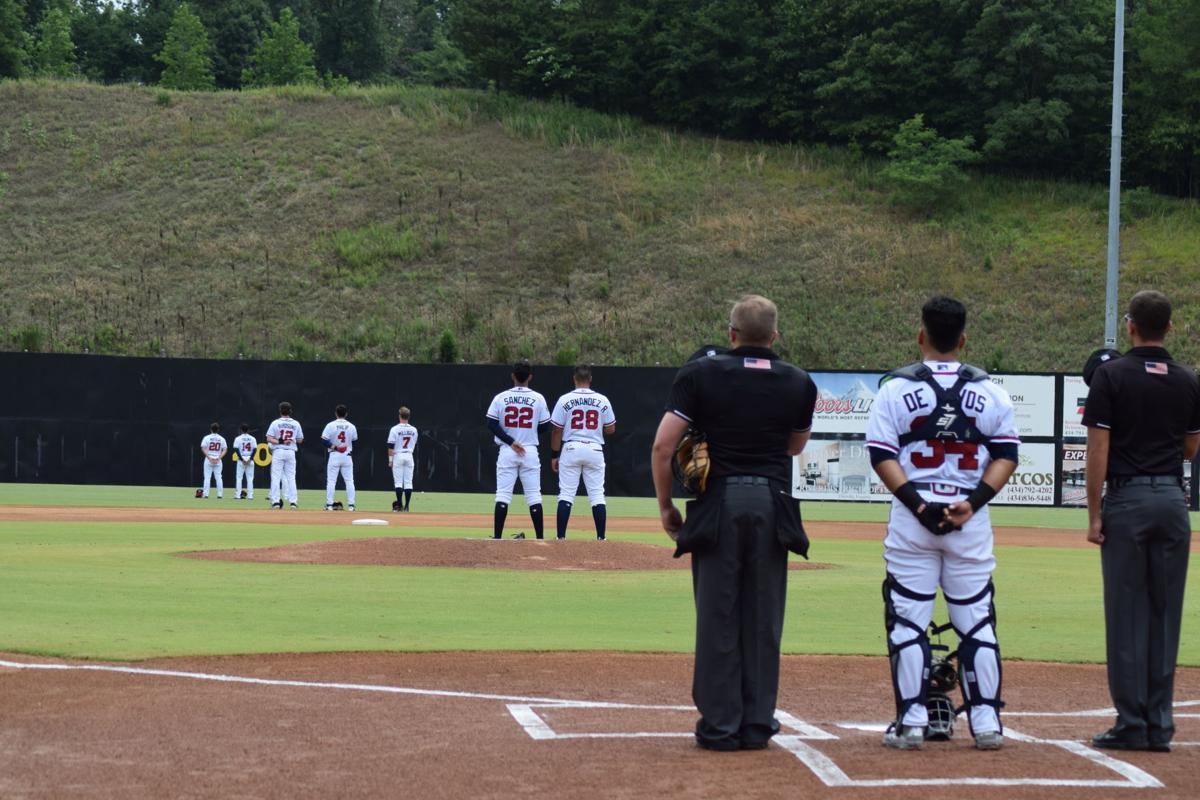 The Danville Braves starters stand on the field during the playing of the National Anthem prior to the start of Wednesday's season-opening doubleheader at Dan Daniel Memorial Park. 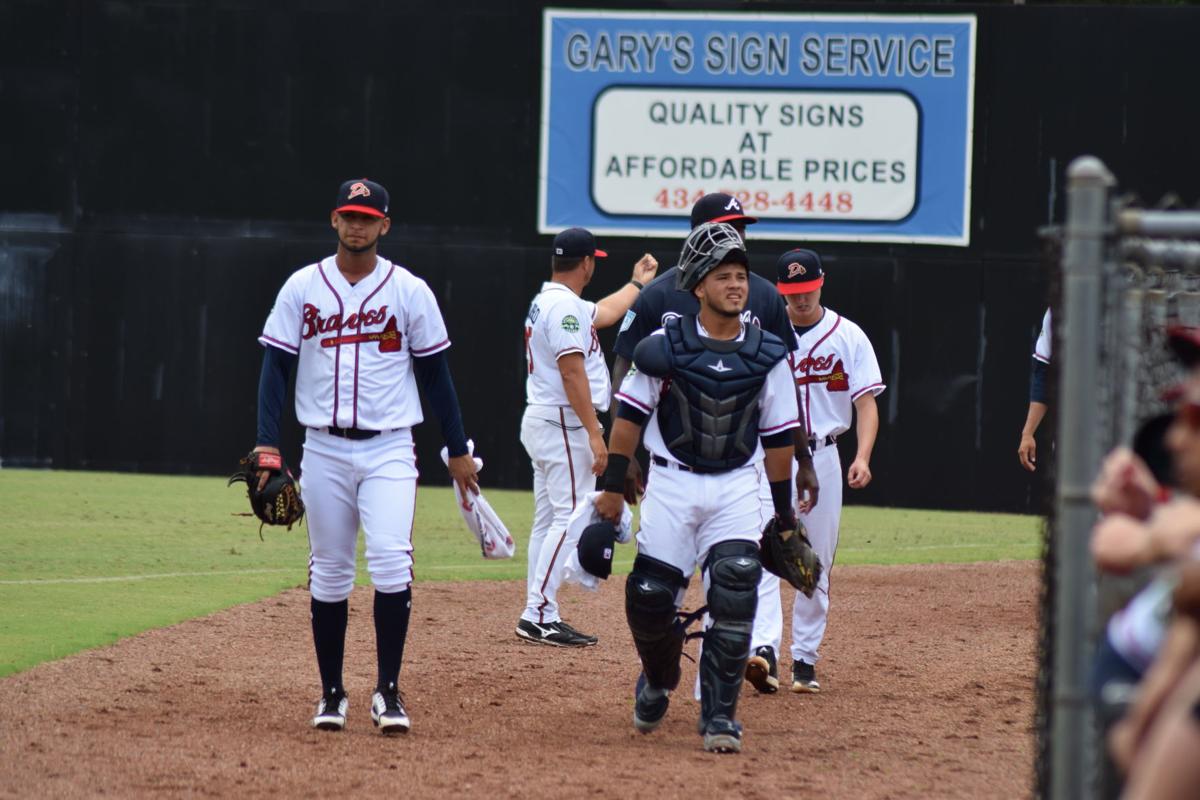 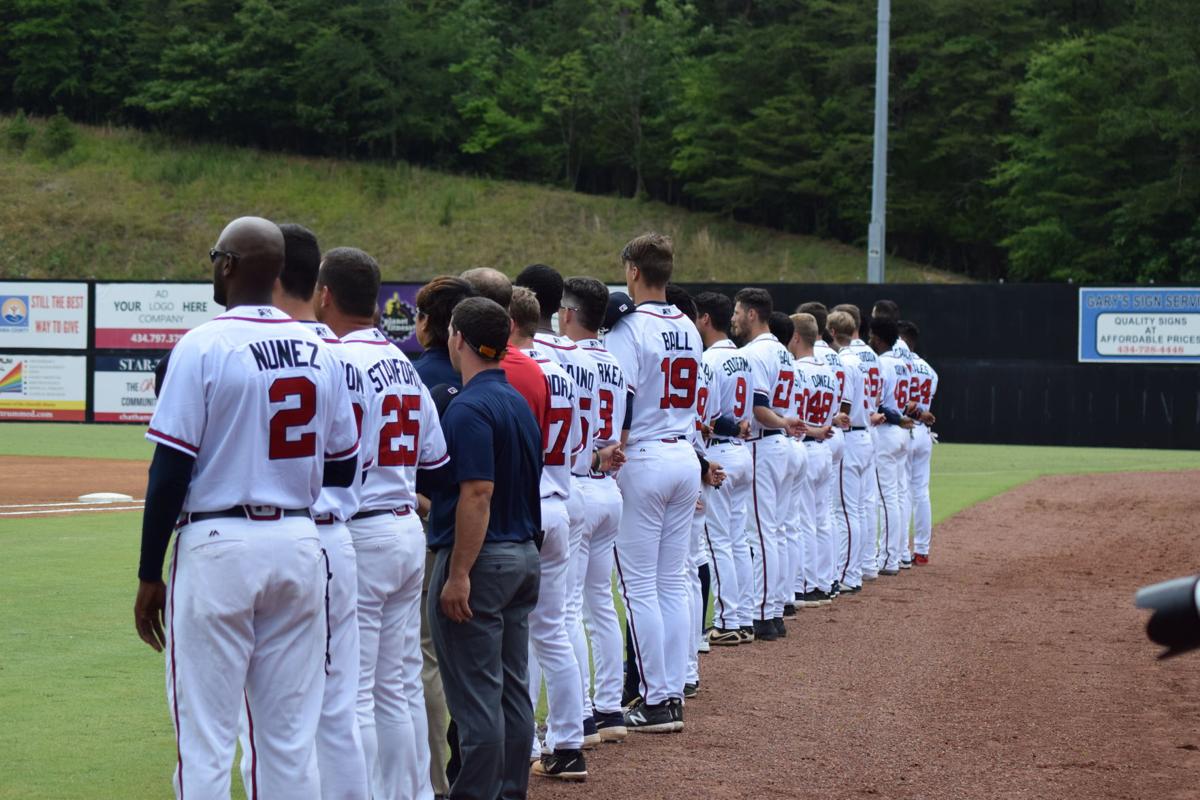 The Danville Braves line up outside of the dugout during the National Anthem. 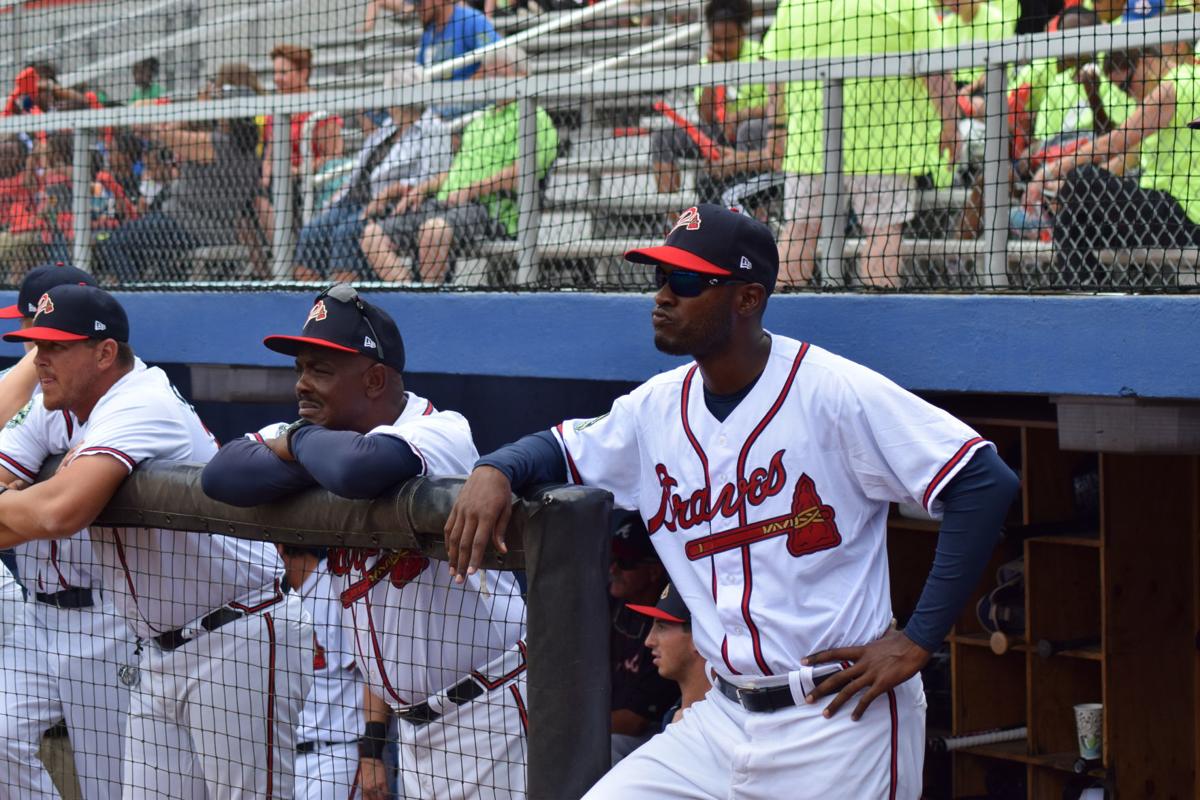 The Danville Braves starters stand on the field during the playing of the National Anthem prior to the start of Wednesday's season-opening doubleheader at Dan Daniel Memorial Park.

The Danville Braves line up outside of the dugout during the National Anthem.

Mother Nature didn’t want the Danville Braves season to begin Tuesday night, so the Braves and Princeton Rays opened the 2019 season with a pair of seven-inning games beginning at 11 a.m. Wednesday.

Game 1 was quite the first impression for the fans, as seven innings weren’t enough. Danville and Princeton went to the eighth inning. The Rays scored in the top of the inning, but 2019 ninth-round draft pick Cody Milligan gave the Braves the 3-2 win with a two-run home run to right field, his first professional hit.

In Game 2, things got even crazier. The Rays scored nine runs in the top of the second inning to take a 9-4 lead, but the Braves didn’t quit, using a grand slam from Ray Hernandez to help come from behind and pick up a 12-10 win.

“It feels great,” said Danville Manager Anthony Nuñez, who is in his first season as a professional manager. “The guys put great effort into the game. We competed; we battled the entire game. I cannot ask for any more.”

It was two completely different games, but the one thing both games had in common was the Braves had to come from behind late to earn the wins.

“It just shows that everybody is pulling on the same side of the rope,” said Milligan said. “You win as a team; you lose as a team, and today we won as a team.”

The Princeton Rays looked ready to steal one to open the season. The extra-inning rules in Minor League Baseball place a runner on second base to start each extra inning. The Braves inticed a flyout to start the inning, but the right fielder was late getting the throw in and the runner scored all the way from second base to give the Rays a 2-1 lead.

Michael Mateja was sent to second base to start the bottom of the eighth. After a strikeout, Milligan stepped up and crushed a ball 100 miles-per-hour to right field and it just barely cleared the 20-foot wall for his first professional hit and a walk-off win for the Braves.

“It felt incredible,” Milligan said of the walk-off home run. “I got a 2-0 count, just kind of looked for something to hit.”

The Braves got off to a strong start in a rare morning first pitch. After a clean top of the first, Victor De Hoyos doubled with two outs and 2019 32nd-round draft pick Bryce Ball drove him in with a single to left field.

Danville started Filyer Sanchez on the mound, and the left-hander held the Rays off the board until a solo home run by Yunior Ramirez tied the game in the top of the fifth.

Sanchez was pulled after five innings, allowing the one run on five hits, one walk with a strikeout. Zach Daniels came in for the Braves in relief and worked two scoreless innings before Alex Aquino took over in the eighth. He gave up an unearned run to give the Rays the lead, but earned the win after the walk-off home run.

In Game 2, it looked as though Danville was going to cruise to the sweep. The Braves scored four runs in the first, two coming off of a two-run double from Hernandez.

But the lead only lasted a matter of minutes. Pitching was a struggle for both teams in the first few innings, and it allowed Princeton to come roaring back with a nine-run second.

“It was pretty grim there for a moment,” Hernandez said.

But it was just a moment. The Braves responded right away in the bottom half of the inning. The Braves loaded the bases for Hernandez, who lifted a ball over the centerfield wall, over 410 feet, for a grand slam to cut the lead to 9-8.

Hernandez recalled a conversation he had with his father after Tuesday’s game was rained out. He was disappointed not to play, but his dad said everything happens for a reason, ‘tomorrow you might hit a grand slam.’

“It was definitely worth it,” Hernandez said. “Luckily I got exactly what I wanted in that situation, and that doesn’t happen very often.”

Princeton added an insurance run in the fifth to lead 10-8, but Danville was done playing from behind from that point on. Ball led off the bottom of the inning with a 412-foot home run to cut the lead to 10-9, Milligan drew a bases-loaded walk later to tie the game and then two more runs scored on wild pitches during the remainder of the game to earn the win.

After surrendering 10 runs in the first five innings, Danville called on reliever Albinson Volquez. The side-arm throwing right-hander delivered two perfect innings to earn the save.

Danville (2-0) wraps up the season-opening series with Princeton tonight at 6:30 p.m. before welcoming in Johnson City for a weekend series at Dan Daniel Memorial Park.