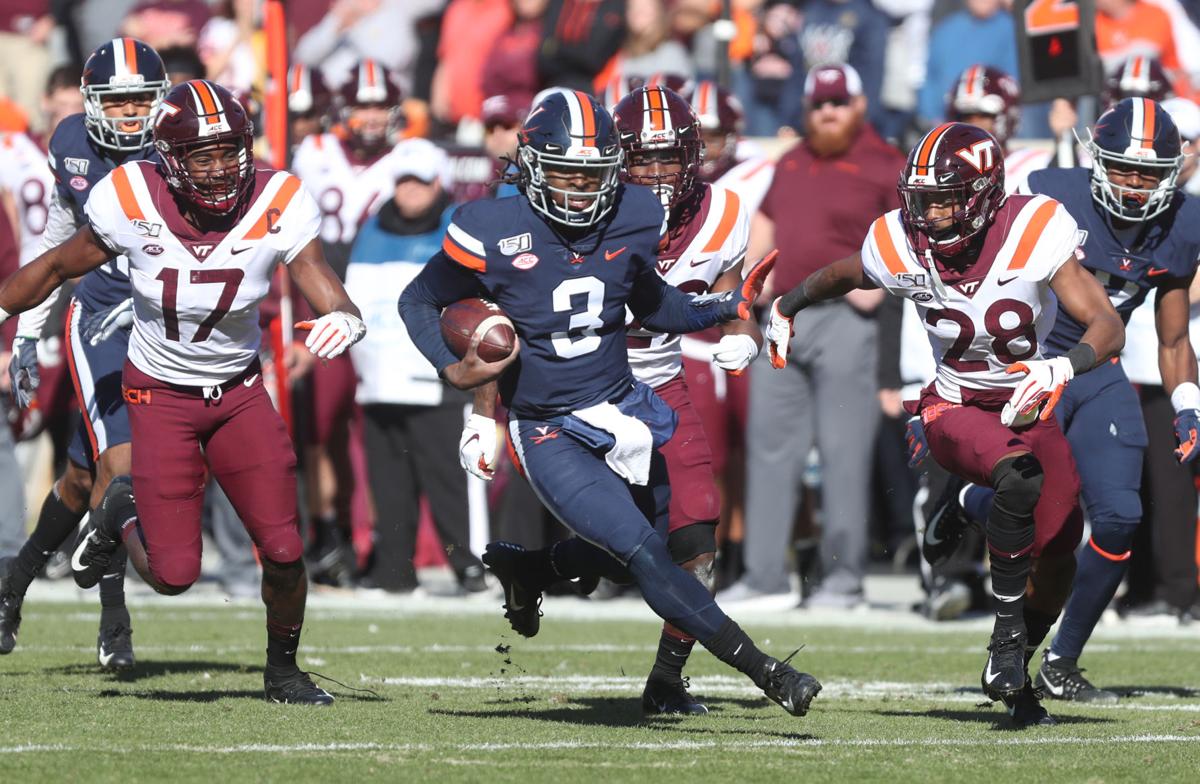 Virginia quarterback Bryce Perkins (3) runs in front of Virginia Tech defenders on his way to scoring in.the first quarter touchdown during the game Friday in Charlottesville. 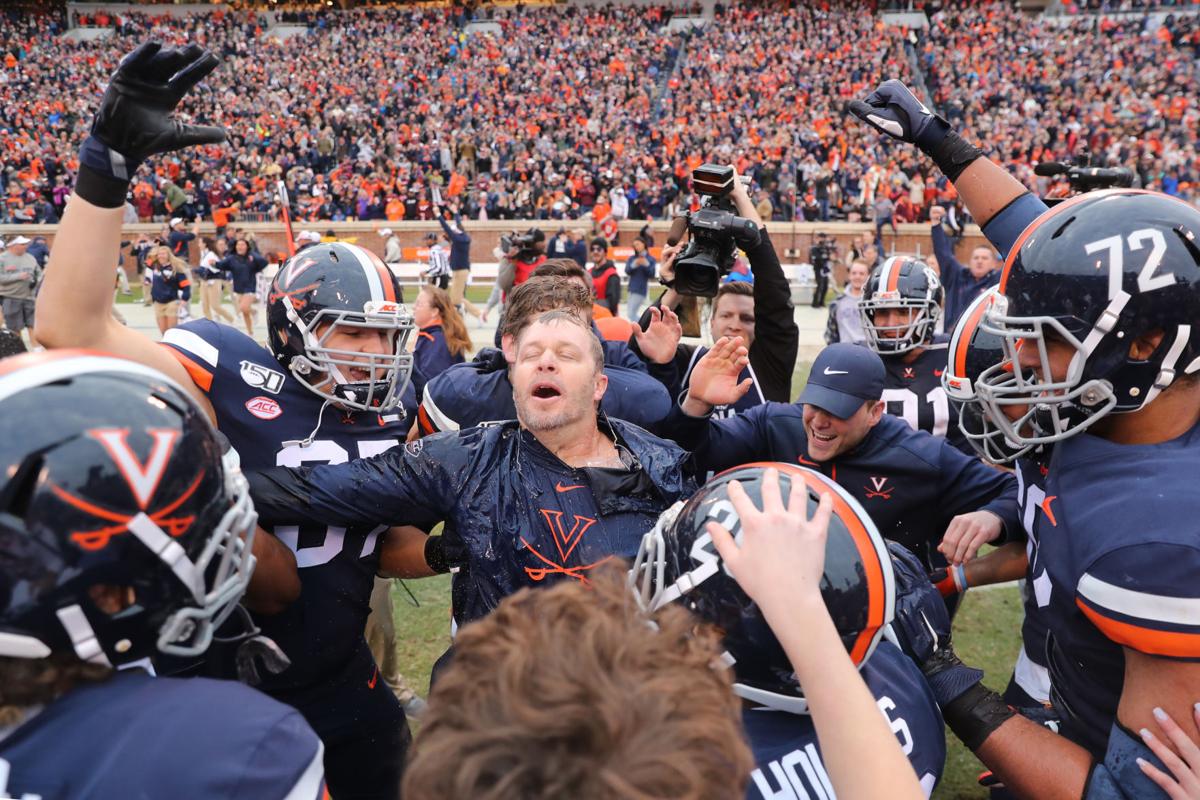 Virginia head coach Bronco Mendenhall is doused with water after defeating Virginia Tech 39-30 to win the Commonwealth Cup on Friday at Scott Stadium.

Virginia quarterback Bryce Perkins (3) runs in front of Virginia Tech defenders on his way to scoring in.the first quarter touchdown during the game Friday in Charlottesville.

Virginia head coach Bronco Mendenhall is doused with water after defeating Virginia Tech 39-30 to win the Commonwealth Cup on Friday at Scott Stadium.

The streak is over. It’s finally over.

Bryce Perkins made plays with his arms and his legs. Noah Taylor played like a senior in a sophomore’s body. The Cavaliers hung tough. And for the first time since 2003, Virginia beat Virginia Tech.

The Cavaliers outlasted the Hokies and won 39-30, on Friday at Scott Stadium.

After jumping out to an early lead, Virginia struggled offensively and allowed Virginia Tech to take second-half leads multiple times. The Cavaliers kept fighting, however, and they eventually made enough plays to win the biggest game of Mendenhall’s Virginia tenure.

“It just seemed like yesterday where fans were rushing the field when we won six games to go to our first bowl game,” Mendenhall said. “That was just three years ago. Seems like that’s a long time ago now.”

The game started as perfectly as Virginia could’ve hoped. Perkins converted a pair of third-and-longs with his legs, and he punctuated the team’s eight-play, 75-yard touchdown drive on the opening series with a 39-yard scamper for a score. Brian Delaney missed the extra point, but it was tough to tell as the Virginia fans in Scott Stadium were overjoyed with the start.

A quick stop gave Virginia another boost of momentum to open the game, but the Hokies made a surge of their own seven minutes into the first half. Perkins was hit by a pair of Virginia Tech players as he threw, and the ball floated aimlessly into the air. Chamarri Conner intercepted the pass, and Virginia Tech turned the turnover into three points, cutting the Virginia’s lead to 6-3 with 3:26 remaining in the third quarter.

A strong tackle by cornerback Nick Grant on third-and-goal helped keep the Hokies out of the end zone. Virginia played solid red-zone defense in the first half, limiting the Hokies to a pair of field goals on two red-zone trips.

On its next drive, Virginia once again turned to Perkins. The redshirt senior quarterback sprinted up the middle as Virginia Tech blitzed on the outside, and he outran everyone on his 67-yard touchdown carry. Through three drives, Perkins had five carries for 137 yards and two touchdowns.

Perkins, who missed Monday’s practice with tonsillitis and was hospitalized after the Liberty game, finished the game with 475 total yards and three touchdowns. It was sweet redemption for Perkins, whose fumble in overtime last season was the team’s final play of a 34-31 loss to the Hokies.

“I had to sit with that all year,” Perkins said. “It hurt, so this game I really wanted to go out there and be aggressive and give everything I had for this team.”

Both teams sputtered throughout the final minutes of the first half, with Virginia Tech adding a field goal before the halftime break. UVa’s Joey Blount nearly intercepted a pass in the back of the end zone to prevent Brian Johnson’s second field goal, but it was ruled incomplete and the call stood after review.

Hendon Hooker threw the first interception of his career later in the half on a Hail Mary with the final seconds of the first half ticking off the clock.

After a sluggish start to the first half, Virginia Tech rallied in the opening moments of the second half. Hooker hit Damon Hazelton for 30 yards on the first play of the half. Four plays later, Hooker took a zone read 34 yards for a touchdown, making multiple Cavaliers miss in the process.

The Hokies kept at it, scoring on a one-yard touchdown run from Deshawn McClease that ended an eight-play, 71-yard scoring drive. The touchdown gave the Hokies a 20-13 lead.

Hooker and company wasted no time responding. Hooker threw a deep ball to Tre Turner, who caught the post pattern and raced into the end zone for a 61-yard touchdown to give Virginia Tech a 27-20 lead.

Perkins and the Cavaliers answered back on the next drive. Two chunk passing plays set up a two-yard touchdown rush from Wayne Taulapapa that tied the game at 27 with 13:30 remaining.

The two teams then traded field goals to tie the game at 30 with just under eight minutes remaining on the clock.

Virginia Tech drove down the field before UVa’s Noah Taylor jumped into a passing lane and recorded his second interception of the day. Taylor’s interception thrilled the Scott Stadium crowd and gave Virginia the ball at its own 35 with just under five minutes remaining.

The Cavaliers drove down the field before their final drive started to fizzle out just inside the Hokies’ side of the field. Virginia used a third-down completion to set up a slightly more manageable field goal for Delaney. The kicker still needed to hit a 48-yarder after missing an extra point earlier in the game.

Delaney stepped up and delivered, his kick sailing through the uprights, and Virginia led 33-30.

The UVa defense went sack crazy on the following drive, putting Hooker in the dirt on three consecutive plays. The final play resulted in a fumble recovery for a touchdown in the end zone by Eli Hanback to put Virginia ahead 39-30.

“The narrative was set up perfectly,” Perkins said. “Both of us for the Coastal championship. We’re at home.

“You couldn’t write a better story.”

Get sports news and scores