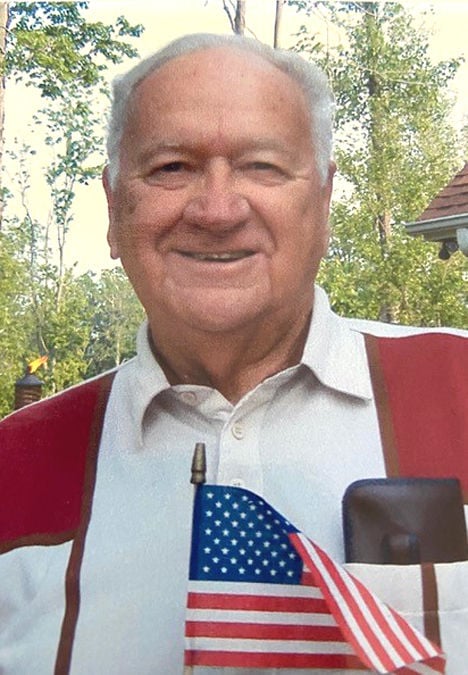 Charles Fuller Edwards, age 92, of Mount Hermon Community, Va., went home to his Lord and Savior, Jesus Christ on Monday, March 23, 2020, at Runk and Pratt, Smith Mountain Lake Retirement Village. He was born on May 24, 1927, in Danville Va., one of ten children to the late Daniel Coleman Edwards and the late Beulah Cook Edwards. He was preceded in death by six brothers, William, John, Clarence, Norman, Nelson and James Edwards; and three sisters, Virginia Warren, Louise Martin and Martha Ann Smith. Charles was married for 70 years to Nancy Moore Edwards who predeceased him on February 2, 2020, just seven weeks ago. Charles and his nine brothers and sisters grew up on a farm in Dry Fork, Virginia. He attended school at Sharon Elementary and Whitmell High Schools. Charles was a World War II veteran of the Navy. He married Nancy in 1950 and together they raised two daughters to love the Lord and serve Him as members of Mount Hermon Baptist Church. Charles served in many roles there Deacon, Sunday School superintendent, a founding member of the New Generation Choir, sang tenor in the adult choir and the men's quartet. He worked many years in the dry cleaning business, as a supervisor in Dan River Mills, and officiated local baseball and football games. He eventually retired from the City of Danville Public Works Department. Post retirement, Charles drove a school bus for many years. He was a devoted friend to many. His primary love always went to his immediate and extended family and church community. He served faithfully at Mt. Hermon throughout his life. Charles had a gregarious spirit, loved surf fishing, and many will remember his love of games and sports (which he successfully played to win). Neighborhood children would come to the door and ask Nancy, "Can Mr. Edwards come out and play?" You would find him teaching ball, croquet, badminton or just playing hide-and-seek. Indoors there was Scrabble, card games like Rook, Skip-Bo, and Canasta or playing jack rocks on the floor with his girls. Charles is survived by two daughters, Alice E. Carty (Fitz) of Haymarket, Va., and Janet E. McCarter (Van) of Blue Ridge, Va.; and four grandchildren, Wendy Haymore Shields, Kimberly Carty, Brian Carty and Courtney Haymore Wisecarver; along with nine great-grandchildren. He is also survived by numerous beloved nieces and nephews. The family will hold a private graveside service on Thursday, March 26, 2020, at 11 a.m. at Highland Burial Park with son-in-law, Fitz Carty officiating. The family will invite extended family friends to gather for a memorial celebration to be announced at a later time. The family would like to thank the staff at Runk and Pratt who have so warmly embraced Nancy and Charles since October 2019. Special thanks are also extended to the hospice team of Medi Home Health and Hospice for their support and care this past month. The tenderness and compassion for Charles and for the family made this journey just a bit easier as they focused on his daily comfort and care. Charles defied death numerous times over the past twenty years. He was always concerned about "who will take care of Mama", so he fought to be here for her. He fought the good fight, he finished the course, and he kept the faith. He has now heard the words of our Lord, "Well done, good and faithful servant." In lieu of flowers, the family requests that memorial donations be made to the Mount Hermon Volunteer Fire Department, www.mhvfd.org, 4268 Franklin Tpke, Danville, VA 24540. Online condolences may be made at www.norrisfuneral.com. Due to recent events, and in compliance with the government mandate, we must limit the number of service attendants to 10 people at this time. If you would like to stop by and pay your respects to the family, you are still welcome to do so.