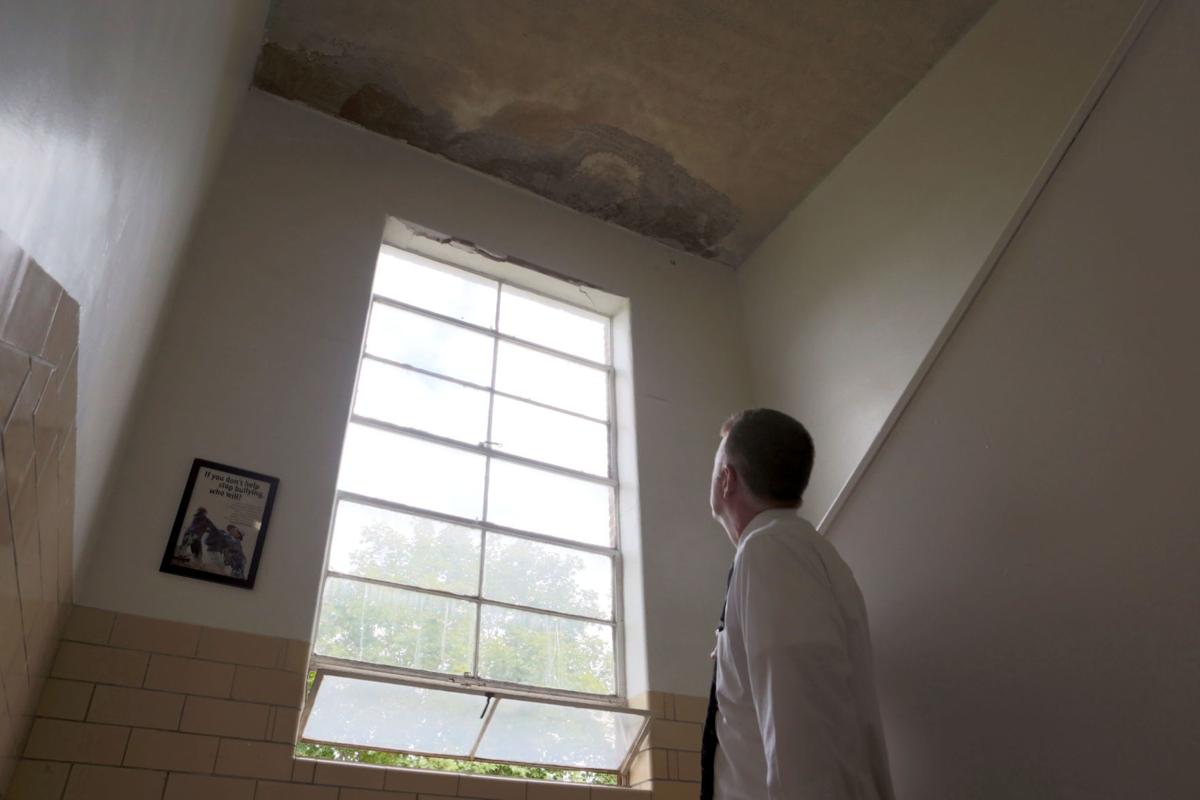 Dublin Middle School Principal Adam Joyce looks up at water damage in a school stairway. The school is being replaced with a new building after a local tax increase. However, many rural localities are too fiscally stressed to take on such work alone. 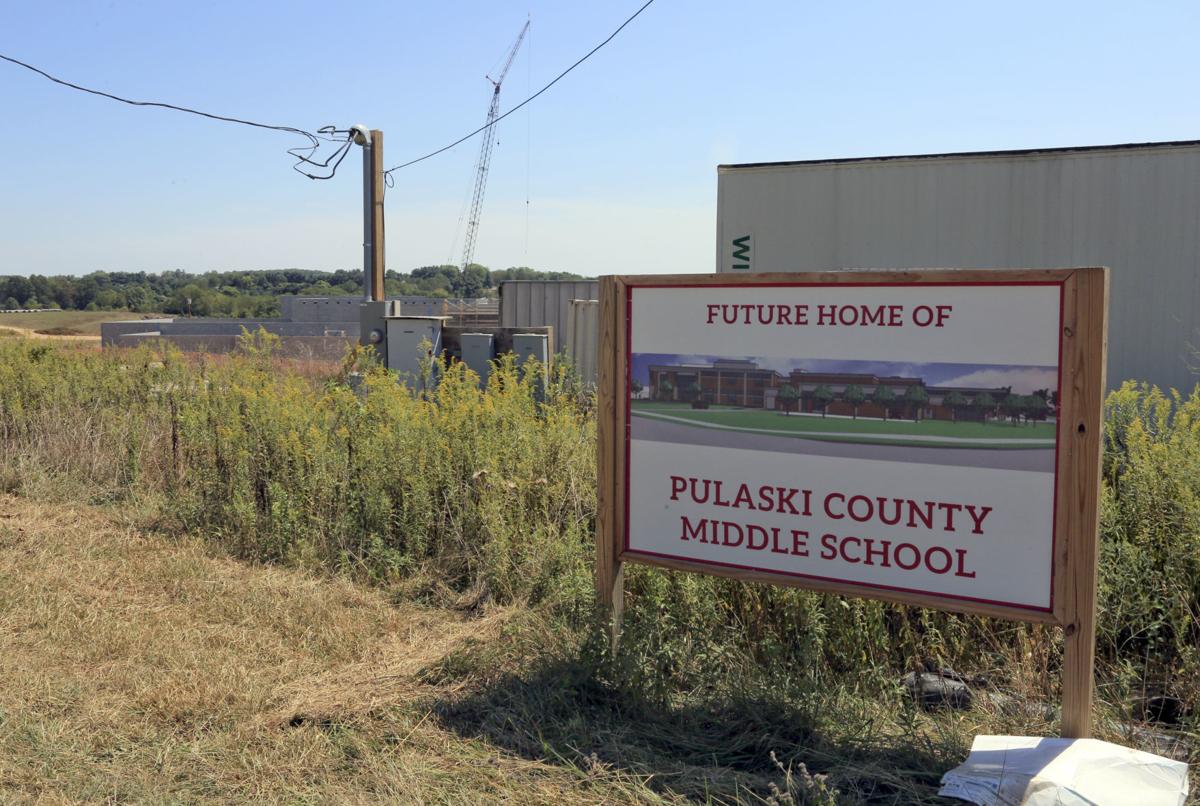 The new Pulaski County Middle School will open for the 2020-21 school year. 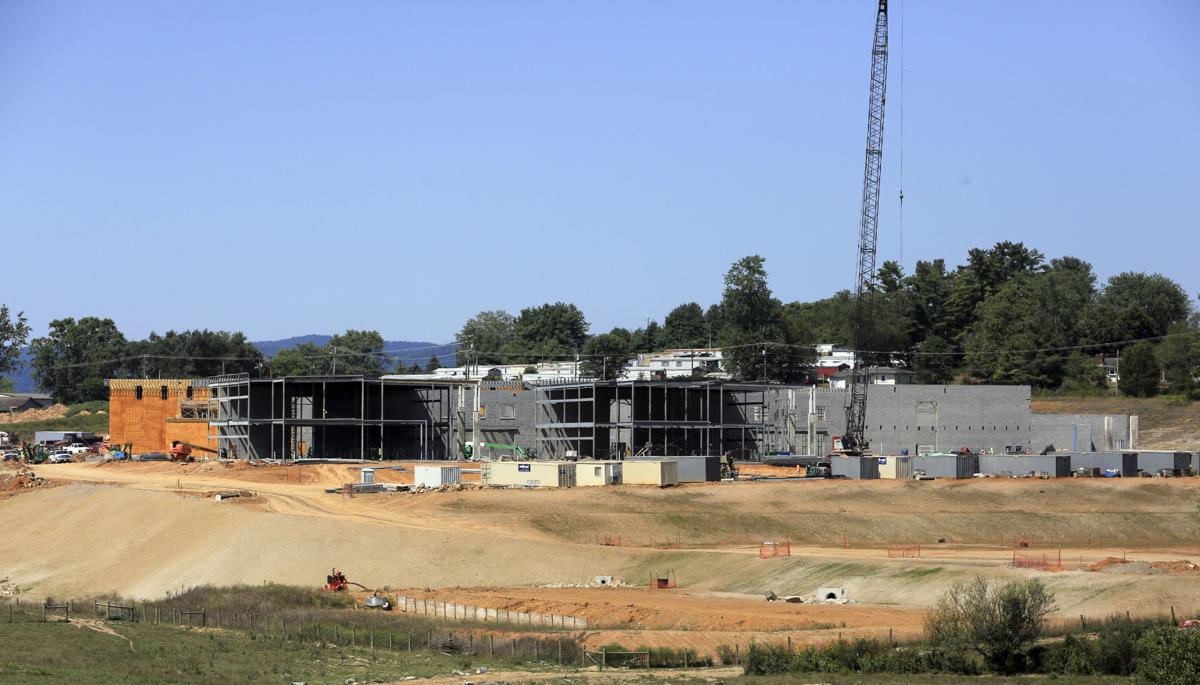 The new consolidated Pulaski Middle School is seen under construction in September. The school will replace two older middle schools.

Dublin Middle School Principal Adam Joyce looks up at water damage in a school stairway. The school is being replaced with a new building after a local tax increase. However, many rural localities are too fiscally stressed to take on such work alone.

The new Pulaski County Middle School will open for the 2020-21 school year.

The new consolidated Pulaski Middle School is seen under construction in September. The school will replace two older middle schools.

Last week at the Capitol, they heard a few bills proposing ideas for how the state can assist localities to upgrade or replace schools, some of which date to before World War I. They’ve become familiar with the stories about ceiling tiles falling, mold, rainwater leaking through roofs and into classrooms, and broken HVAC systems prompting schools to close for days at a time.

“I just think we need to insist upon this becoming a priority,” Del. Delores McQuinn , D-Richmond, told a panel of superintendents.

The school executives described a list of problems preventing them from providing a quality education for students, and they asked the state to step up to provide funding for school construction.

“We don’t have the ability locally to put additional funding into our school infrastructure,” said Bristol Schools Superintendent Keith Perrigan.

Del. Israel O’Quinn, R-Washington, introduced a bill to revive a pre-recession fund to provide grants to school divisions to help curb costs for school construction. It would shift money from the Literary Fund into this fund.

The Literary Fund provides loans for school construction projects. School officials — especially those from the more impoverished districts — say it’s hard for them to tap into that pool of money. They’d prefer grants over loans. And before shovels go into the ground, they need to hire a firm to design a school, and they say they can’t use Literary Fund loans on that aspect.

O’Quinn’s bill sailed out of a House Education Committee on a bipartisan vote of 20-2. He presented it Thursday evening to a subcommittee of the House Appropriations Committee.

Del. David Bulova, D-Fairfax, said the proposal would mean some schools that can qualify for loans under the Literary Fund wouldn’t rank high for grants under O’Quinn’s proposal. Under O’Quinn’s bill, more needy schools would be able to better access money in the fund.

Local government and public education groups told the subcommittee members that they supported the bill, and that localities are tapped out on funds to build schools on their own. A coalition of 75 of Virginia’s small and rural schools supported the bill.

Besides Bulova’s comment, no one else expressed issues with the bill. Yet they voted 5-2 on a party line to kill the bill.

Those who voted against it were Bulova, McQuinn and Dels. Chris Hurst, D-Montgomery, Ken Plum, D-Fairfax, and Jay Jones, D-Norfolk. Dels. Nick Rush, R-Montgomery, and Emily Brewer, R-Suffolk, voted for it.

“I just think that, particularly in urban and rural areas, probably the systems really need to come together and make a little more noise before coming to this place,” McQuinn said. “I say that because unfortunately the squeaky wheel gets the grease.”

After O’Quinn left the meeting, a Democratic delegate approached him and said they had to kill the bill because “it came from higher up.”

A spokeswoman for Gov. Ralph Northam said in an email Thursday that the administration didn’t have a position on the bill.

“I just wanted to point out you’re going to see a number of bills having to do with construction and renovation, both from the House side and the Senate side, and that is just pointing out a critical need,” Tom Smith, who lobbies for the Virginia Association of School Superintendents, told the House panel that killed the bill. “If this is not the answer, then we need some help at the local level for school construction.”

After small and rural school leaders heard that O’Quinn’s bill died, they made sure to have people show up at a Senate meeting on Thursday to testify to the duplicate bill Sen. Todd Pillion, R-Washington, is carrying in the Senate.

Middlesex County Supervisor John Koontz said the bill would restore some of the state’s role in helping localities fix and build new schools. He pleaded for the senators to “take this very seriously.”

“It stops the crumbling,” he said.

The Senate Education and Health Committee’s subcommittee on public education voted to recommend the bill to the full committee.

There are a handful of other active bills related to school construction. The legislation that holds the most promise of passing that will provide immediate relief are requests from localities to get permission to raise their sales tax to raise money to build schools.

The price tag for a new school in Northern Virginia is similar to a new one in Southside or Southwest Virginia. In some rural schools, students have to move to other classrooms because of mold. Meanwhile, in Northern Virginia, students are learning artificial intelligence and DNA science.

“This is creating an unequal education based on ZIP code,” Sen. Bill Stanley, R-Franklin County, told his Senate colleagues when presenting a bill.

The Senate Finance Committee killed his bill that would put on November’s ballot a question asking Virginians if they want the General Assembly to issue $3 billion in state general obligation bonds to go toward constructing, repairing or upgrading K-12 schools.

The results of the referendum wouldn’t bind the legislature to issuing bonds. Senators didn’t see a point in doing a referendum on a problem they know exists.

“Why don’t we just summon the courage to introduce the legislation to raise the money to fix this problem?” Sen. Creigh Deeds, D-Bath, said. “I know it’s a problem. I stare at it every single day. Let’s just raise taxes and fix it.”

Stanley said he wasn’t opposed to that idea. Still, he said, “that’s putting the cart before the horse.”

Stanley has other bills moving along that would create a fund — although it’ll be empty — that could eventually be used to provide grants to fix school roofs, as well as have the Department of Education establish minimum standards for a modern school.

“We’ve got to say to ourselves, this is a priority,” Stanley said.

Too stressed or too cheap? How to assess a locality's ability to pay for improved schools

When Pulaski County adopted a historic 13-cent real estate tax increase in 2018, the locality identified itself as one both willing and able to fund a major school capital project.

PULASKI — Talks of what to do with Pulaski County’s two antiquated middle schools were ongoing for decades until a 2017 referendum finally put the community at a crossroads.

Technical education courses in demand by students, but facilities lag

When Franklin County High School seniors gather at Cy Dillon Stadium in red and white caps and gowns, the moment is bittersweet for county school board officials.

RICHMOND — As the General Assembly’s money committees put finishing touches on the state’s next two-year budget, a coalition of small and rural schools is advocating remedies for unmet and inadequately funded public education needs.