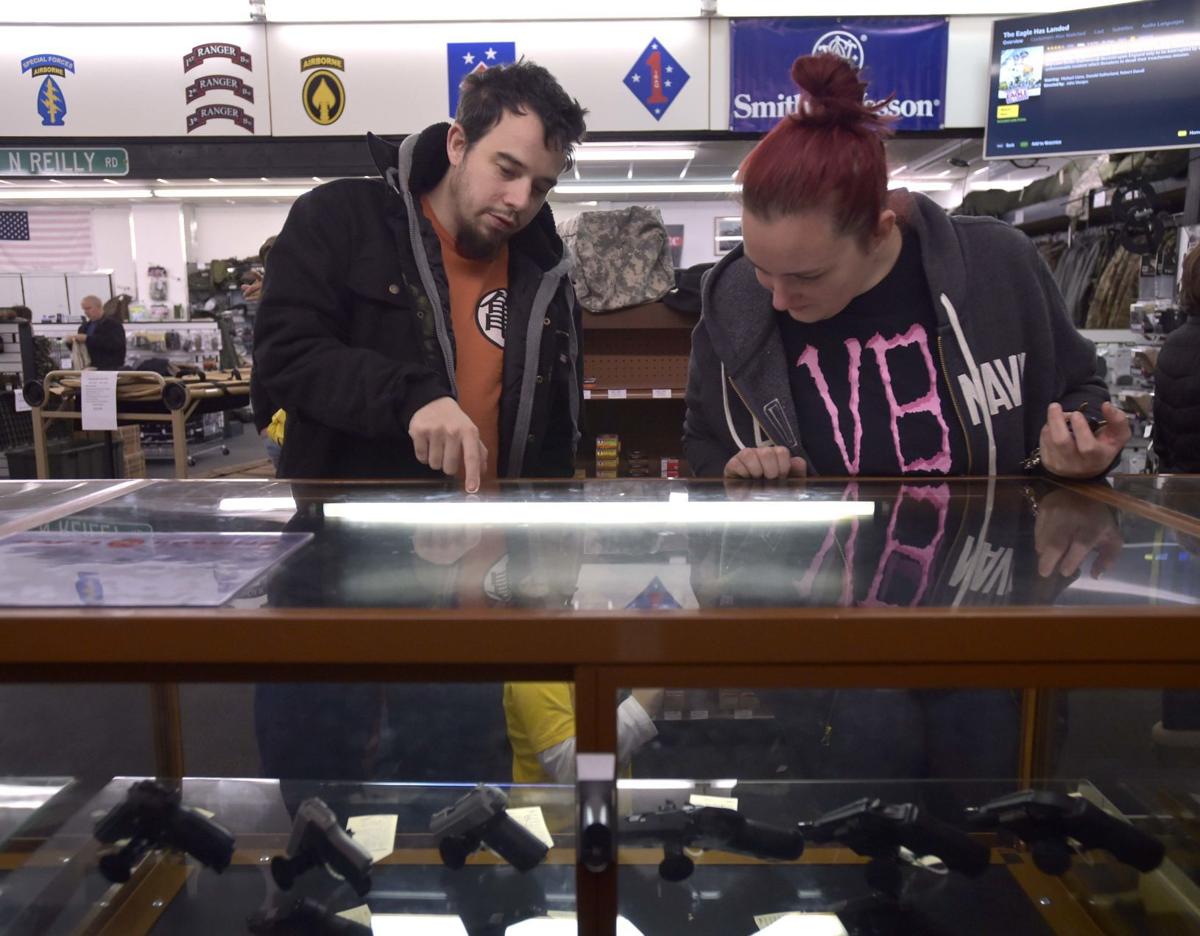 Stephen King, of Gretna and Ashley King shop for a gun at Indian Rock Tactical in Lynchburg on November 27, 2019. Proposed legislation from Gov. Ralph Northam's office in July included reinstating a law allowing only one handgun purchase within a 30-day period. 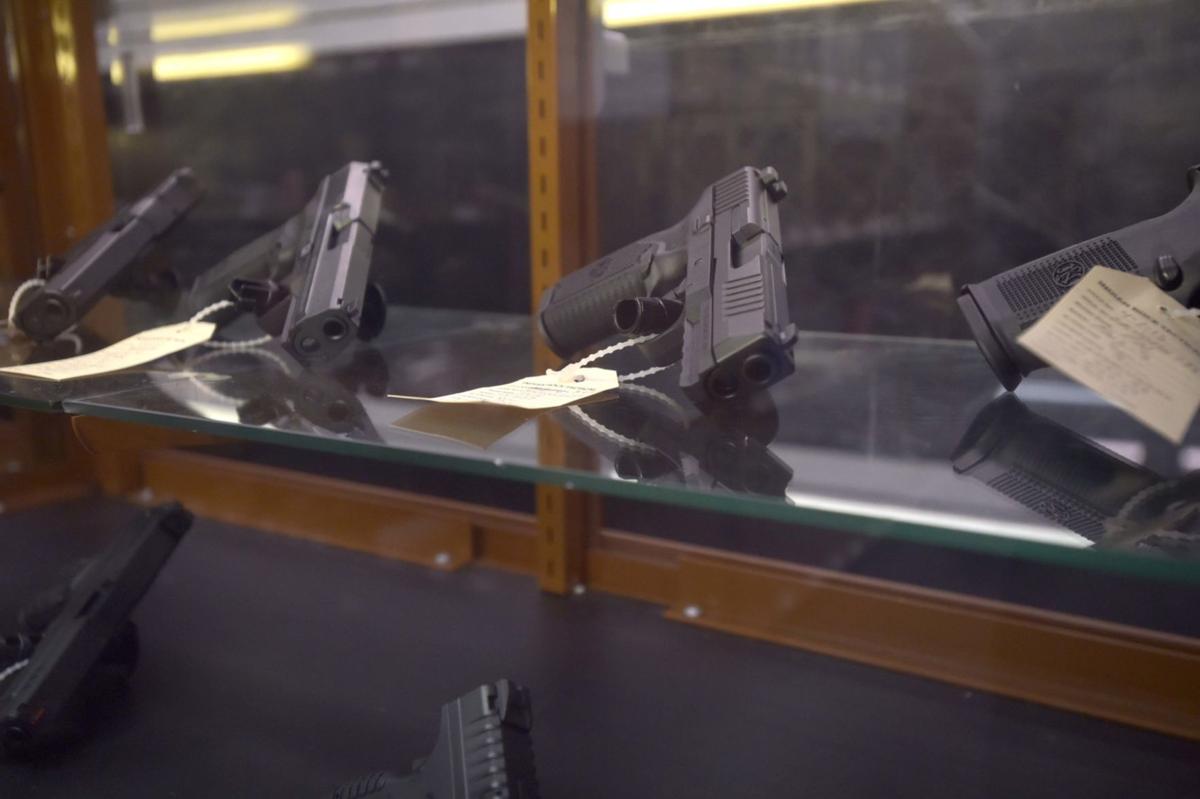 Guns at Indian Rock Tactical in Lynchburg on November 27, 2019. 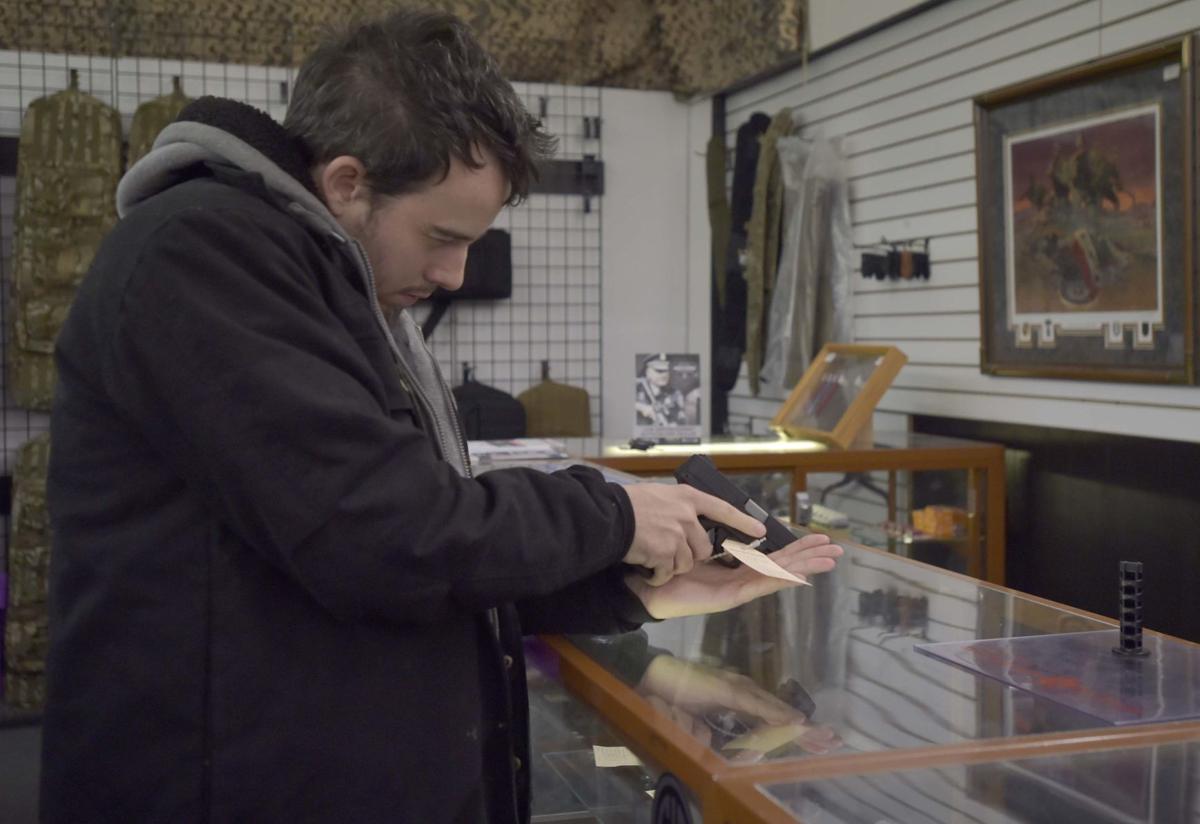 Stephen King looks at a Taurus G3 pistol at Indian Rock Tactical in Lynchburg on November 27, 2019. Proposed legislation from Gov. Ralph Northam's office in July included reinstating a law allowing only one handgun purchase within a 30-day period. 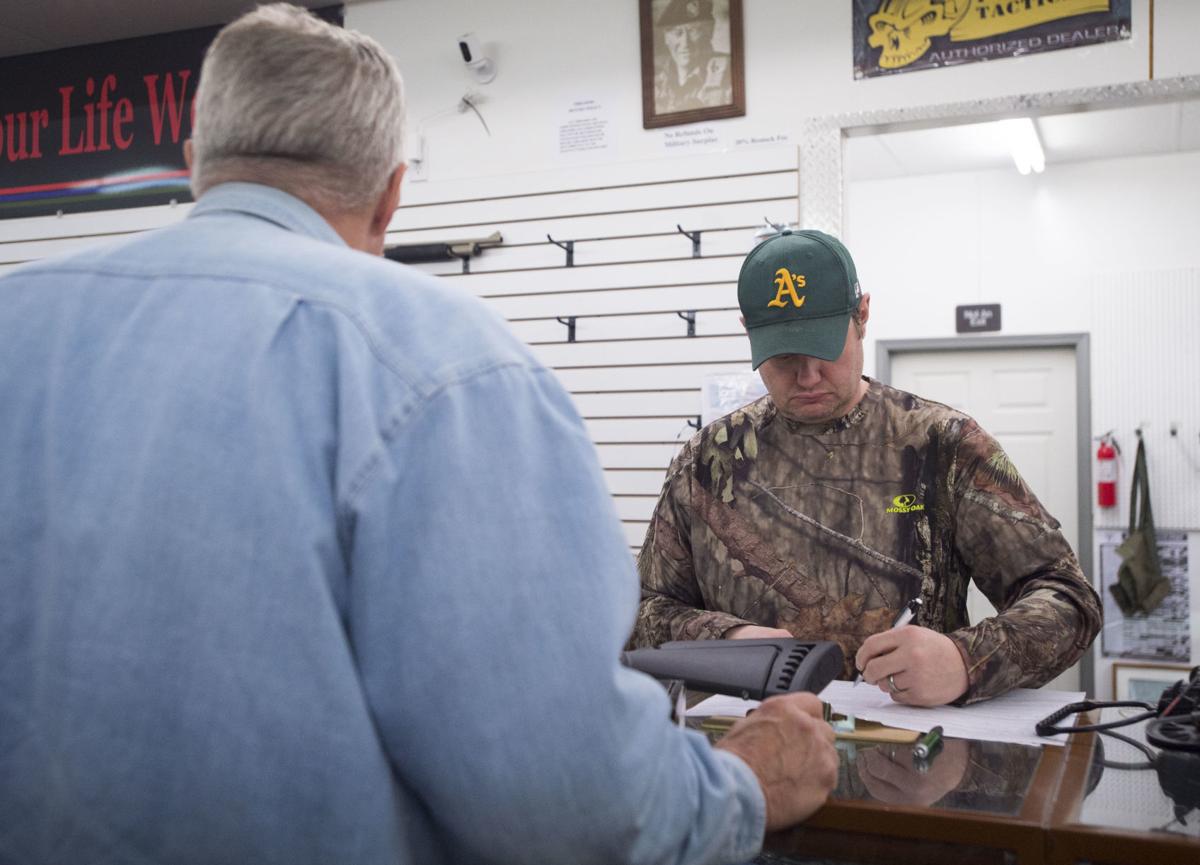 Jason Campbell, store manager of Indian Rock Tactical in Lynchburg, writes up a transaction for a customer on November 27, 2019 as localities across Central Virginia debate the issue of Second Amendment sanctuaries. 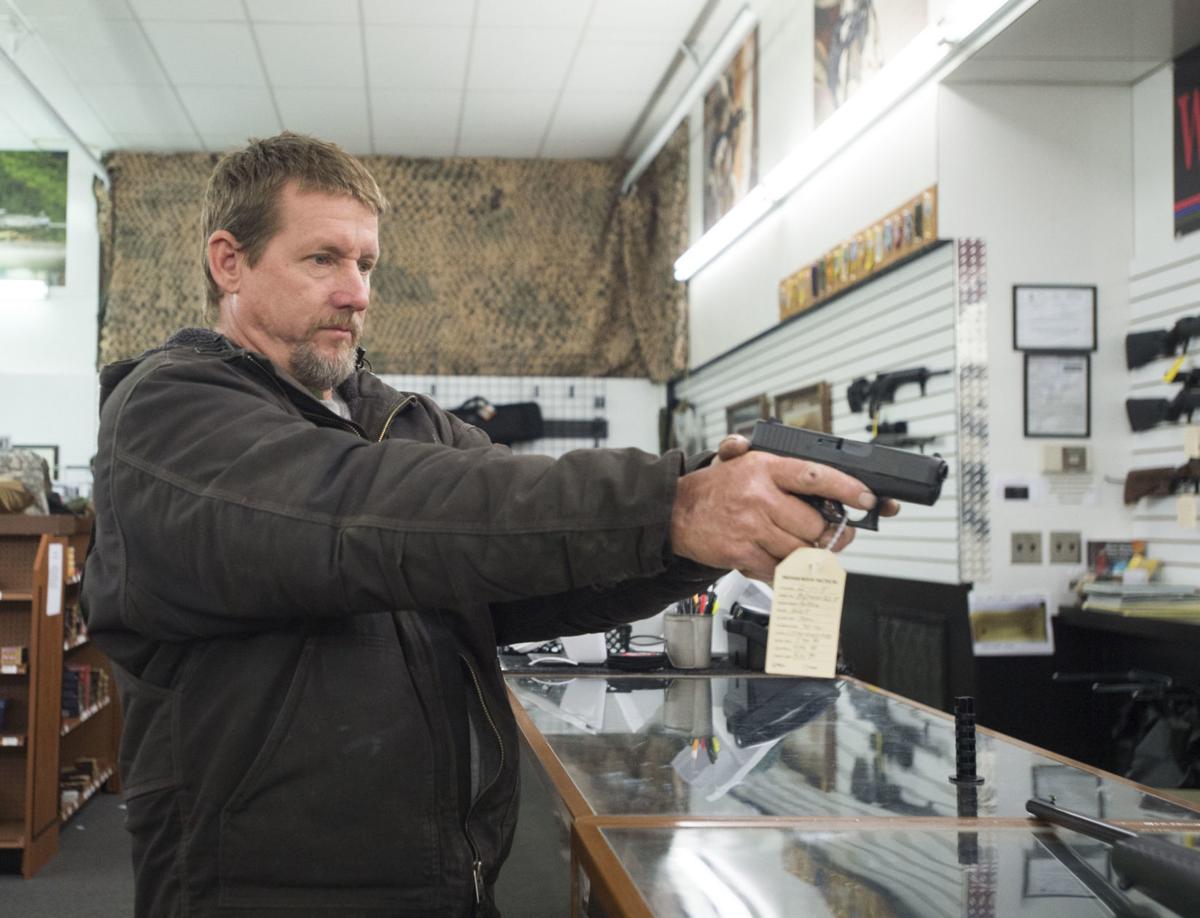 Gary Smith, of Amherst, points a Glock 27 gun at Indian Rock Tactical in Lynchburg on November 27, 2019.

Stephen King, of Gretna and Ashley King shop for a gun at Indian Rock Tactical in Lynchburg on November 27, 2019. Proposed legislation from Gov. Ralph Northam's office in July included reinstating a law allowing only one handgun purchase within a 30-day period.

Guns at Indian Rock Tactical in Lynchburg on November 27, 2019.

Stephen King looks at a Taurus G3 pistol at Indian Rock Tactical in Lynchburg on November 27, 2019. Proposed legislation from Gov. Ralph Northam's office in July included reinstating a law allowing only one handgun purchase within a 30-day period.

Jason Campbell, store manager of Indian Rock Tactical in Lynchburg, writes up a transaction for a customer on November 27, 2019 as localities across Central Virginia debate the issue of Second Amendment sanctuaries.

Gary Smith, of Amherst, points a Glock 27 gun at Indian Rock Tactical in Lynchburg on November 27, 2019.

The ever growing number of Second Amendment sanctuary declarations in Virginia makes it clear residents are concerned about preserving their gun rights. How local law enforcement agencies will mete out justice of a largely symbolic measure that varies from locality to locality remains much less clear.

“My only worry is that law enforcement will be put in a bit of a pickle. I want to do things right, but I understand the angst. I think the anger and fear you see right now is really indicative of what’s happening in the polarizing of politics in Virginia and nationwide,” said U.S. Rep. Denver Riggleman, R-5th.

The results of the Nov. 5 election that put Democrats in control of both chambers of the legislature for the first time in more than 20 years served to stoke the fears of gun-rights activists. In July, Gov. Ralph Northam proposed several pieces of legislation, including red flag laws or Extreme Risk Protection Orders, that would “temporarily separate a person from firearms if the person exhibits dangerous behavior that presents an immediate threat to self or others;” legislation banning “dangerous weapons” which would include bans on assault weapons, high-capacity magazines, bump stocks and silencers; and universal background checks.

With the state now blue, gun owners and Second Amendment supporters are fearful of what could pass.

Until recently, the term “sanctuary city” referred to immigration. It’s often a term used for a locality that has limited the extent to which it will volunteer resources in support of federal immigration enforcement agents’ responsibility to enforce federal immigration law, according to Naomi Tsu, an attorney at the Southern Poverty Law Center.

Gun-rights activists adopted the term to lobby against state legislation that might limit the gun rights they believe are afforded by the U.S. Constitution. As of this week, more than a dozen localities across Virginia have declared Second Amendment sanctuary status, including Pittsylvania, Campbell and Appomattox counties, and many more are drafting resolutions, including Nelson and Bedford counties. A “sanctuary” for the Second Amendment in general means the locality opposes possible gun control laws.

Marko Galbreath, a former police officer who now owns T4Tactics, supports the measures as they send a clear message to legislators on where the locality stands.

But based on his past experience, he foresees law enforcement officers being put in a position where they are forced to choose between following state laws and local resolutions.

“I don’t know what each individual chiefs or sheriffs would do, but I do think the state would push them to enforce the laws,” Galbreath said.

Philip Van Cleave, president of the Virginia Citizens Defense League, said this discussion and subsequent votes are important for a number of reasons, including letting those in Richmond know a “large portion of Virginia doesn’t want any more gun control laws, especially gun control laws aimed at law- abiding citizens.”

“If a county passes a resolution, the sheriff is a constitutional officer. No one tells him what to do,” Van Cleave said.

Van Cleave said the sheriff can decide whether or not to enforce unconstitutional laws as can the local police departments.

Van Cleave said the next step for VCDL is to talk with commonwealth’s attorneys and open up a discussion on whether or not they would prosecute those arrested on unconstitutional laws.

In an email addressing the issue of enforcement of Second Amendment sanctuaries on Nov. 22, Charlotte Gomer, a spokesperson for Attorney General Mark Herring, emphasized that no new gun regulations have been passed.

“These resolutions appear to be nothing more than symbolic since no new gun laws have passed or even been considered yet. It’s not clear what a Second Amendment sanctuary is, what its proponents are hoping to accomplish, or what authority they think they have to preemptively opt-out of gun safety laws, but if the Virginia Citizens Defense League is circulating it, you can bet it’s a bad idea. If the General Assembly passes new gun safety laws, as Virginia voters demanded just two weeks ago, we expect that everyone will follow the law and keep their citizens safe,” Gomer said in an email.

Central Virginia sheriffs said they will be guided by the U.S. Constitution.

“As a constitutional officer — as sheriff — I’m here to protect the rights of citizens against things like unlawful search and seizure. State and federal agencies don’t come in unless we ask them to. As far as sanctuaries; the individual has the right to bear arms. As long as they have proper credentials, then that’s fine. Our office isn’t going to knock on doors and we aren’t going to allow people to come in and round up firearms and what have you. If [the individual is] mentally competent and not a felon, there shouldn’t be a problem. As long as the Constitution reads the way I read it, we’re going to be okay,” Hill said.

Hill said he believes any changes on the state level are to ensure the safety of everyone and shouldn’t impact those who should be able to have guns.

“That’s the ultimate goal to keep guns away from felons and those with mental disabilities. They want to put up safeguards to keep people safe. But coming in and taking all firearms? That’s not going to happen,” Hill said.

Appomattox Sheriff-elect Donald Simpson said the laws people are voicing their concerns over have yet to pass and so he’ll have to “wait and see if they are voted on.”

“Then, we’ll have to look at these laws in cooperation with the commonwealth’s attorney. Personally I’m in support of the Second Amendment and will not be enforcing any unconstitutional laws,” Simpson said.

“It’s territory we have never been in before; certainly not in my career,” Simpson said.

Appomattox Commonwealth’s Attorney Leslie “Les” Fleet is on the same page as Simpson. Fleet said he believes in abiding by the law, as long as it’s a constitutional law.

“The U.S. Constitution is the supreme law of the land and as such, I will not enforce [prosecute] any state or local statute that violates the federal or state constitutions. I will wait and see what comes out of Richmond this coming session, but if I believe a law infringes on a 2A right, the sheriff-elect and I are on the same page, that law will not be enforced in Appomattox County,” Fleet said in an email Nov. 30.

Fleet said the way he interprets the state statute is that the Commonwealth’s Attorney General’s Office can’t prosecute on the local level unless invited by the locality’s commonwealth’s attorney. Fleet also said he believes federal agencies have no jurisdiction over the state law.

“If the citizens of Appomattox don’t believe I’m fulfilling my oath of office they can proceed with legal remedies to remove me from office or not re-elect me when my term is over,” Fleet said in an email.

Fleet said this is a new issue and because of that, he’ll be sure to look at everything on a case-by- case basis, but hopes the democratic-controlled General Assembly and the governor rethink their positions and proceed accordingly.

“While the resolutions passed in Appomattox and other localities have no legal ‘teeth’ and therefore do not supplant state or federal law, they do voice the majority opinion of their respective localities and it is up to each elected official how they will proceed. As stated earlier, the Appomattox County Commonwealth’s Attorney’s Office interprets gun control laws as unconstitutional and therefore unenforceable,” Fleet said.

At an Oct. 23 forum hosted by the Amherst chapter of the NAACP in Madison Heights, a resident asked four candidates for sheriff if they would enforce any federal or state law that called for confiscation of guns.

Amherst County Sheriff E.W. Viar, who won the Nov. 5 election and will begin a second term in January, along with the three other former Amherst sheriff’s deputies spoke in favor of preserving the rights of law-abiding gun owners.

Bedford County Sheriff-elect Mike Miller didn’t respond to a request for comment. A post on the Bedford County Sheriff Facebook page expresses support for the Second Amendment and everyone who showed up at a recent board of supervisors meeting, where sanctuary status was discussed.

“There was a spectacular turnout to last night’s Board of Supervisors meeting by members of the community expressing their opinions to protect our Constitutional Rights. It is wonderful to see the community turn out like this! As Sheriff-elect Miller stated last night, there is a lot of work to be done to ensure our rights are protected and it starts with you. Please write to our state representatives and show your support to oppose the proposed gun laws that will be presented for these legislators to consider. Let us make sure the voices of rural Virginia are heard,” the Facebook post read.

Van Cleave said the movement is a “tsunami” and predicted by the time anything gets to the General Assembly, 40 localities will have passed a symbolic sanctuary resolution.

“I’ve been doing this 20 years and I’ve never seen anything like this. Nothing comes close. I’ve been there; at Virginia Tech, at Virginia Beach, through the Obama administration,” Van Cleave said. “Nothing has woken gun owners up like this before.”