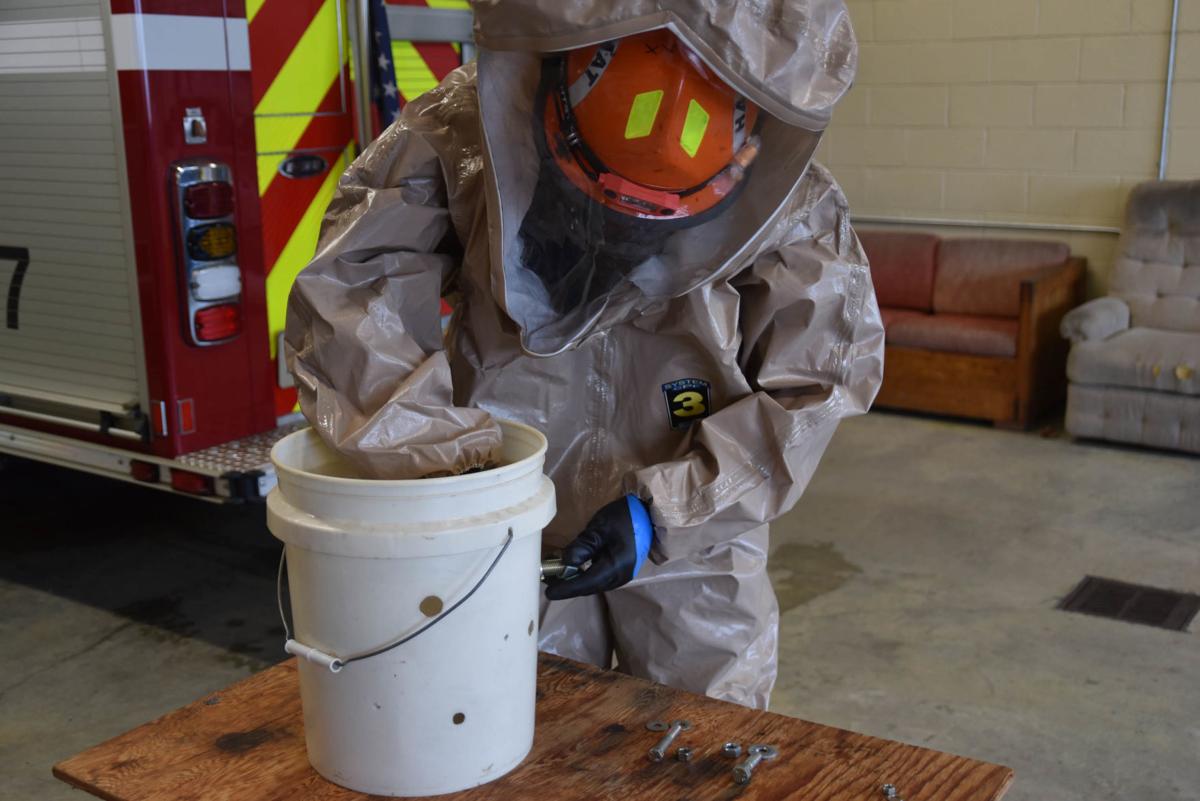 Tyler Capps uses a vinyl hazmat suit to show the difficulty of using hands inside the suit on Tuesday at Danville Fire Station No. 7. 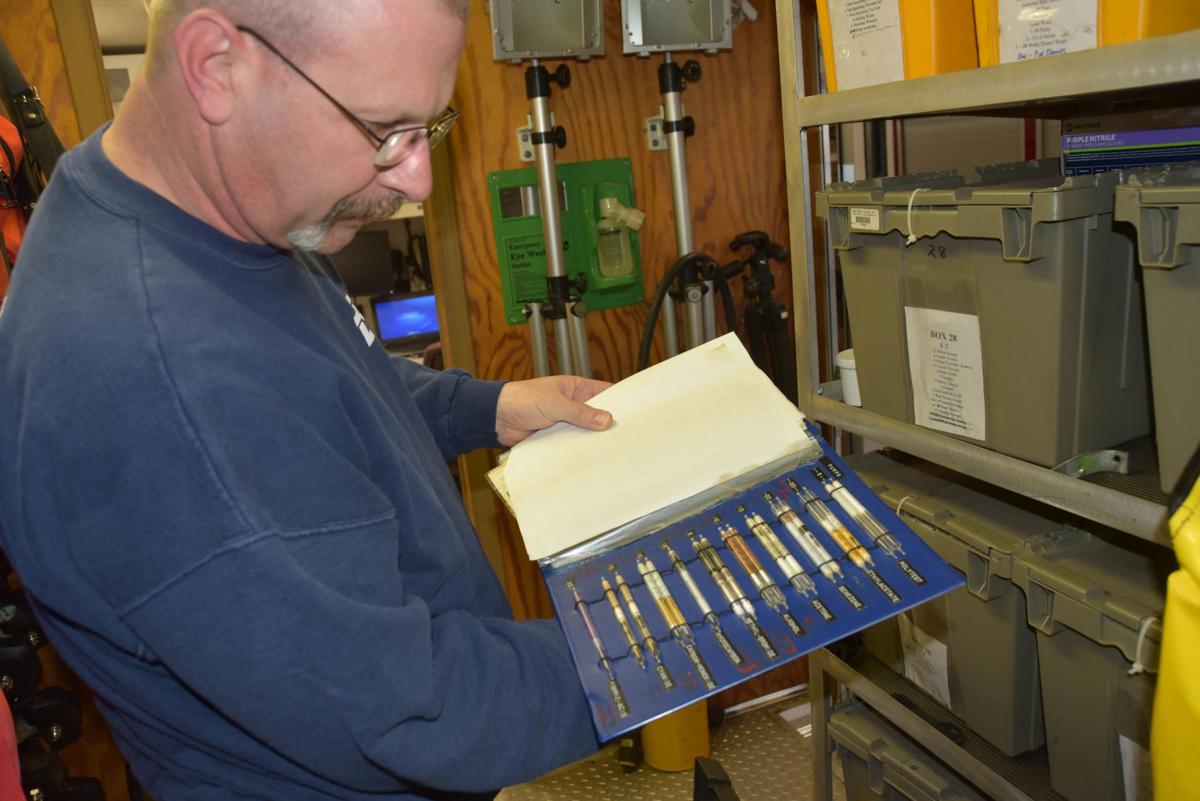 Kevin Farris shows of a draeger tube used by the hazmat team to identify different chemicals Tuesday at Danville Fire Station No. 7. 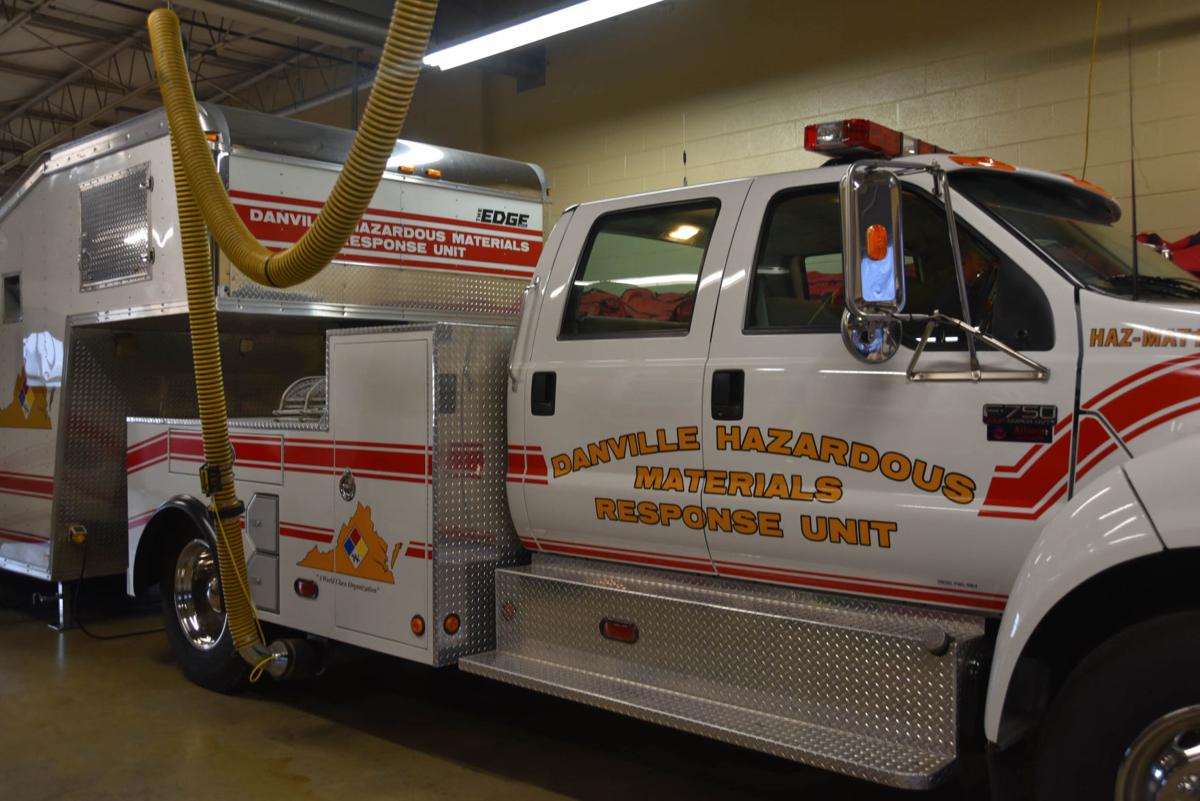 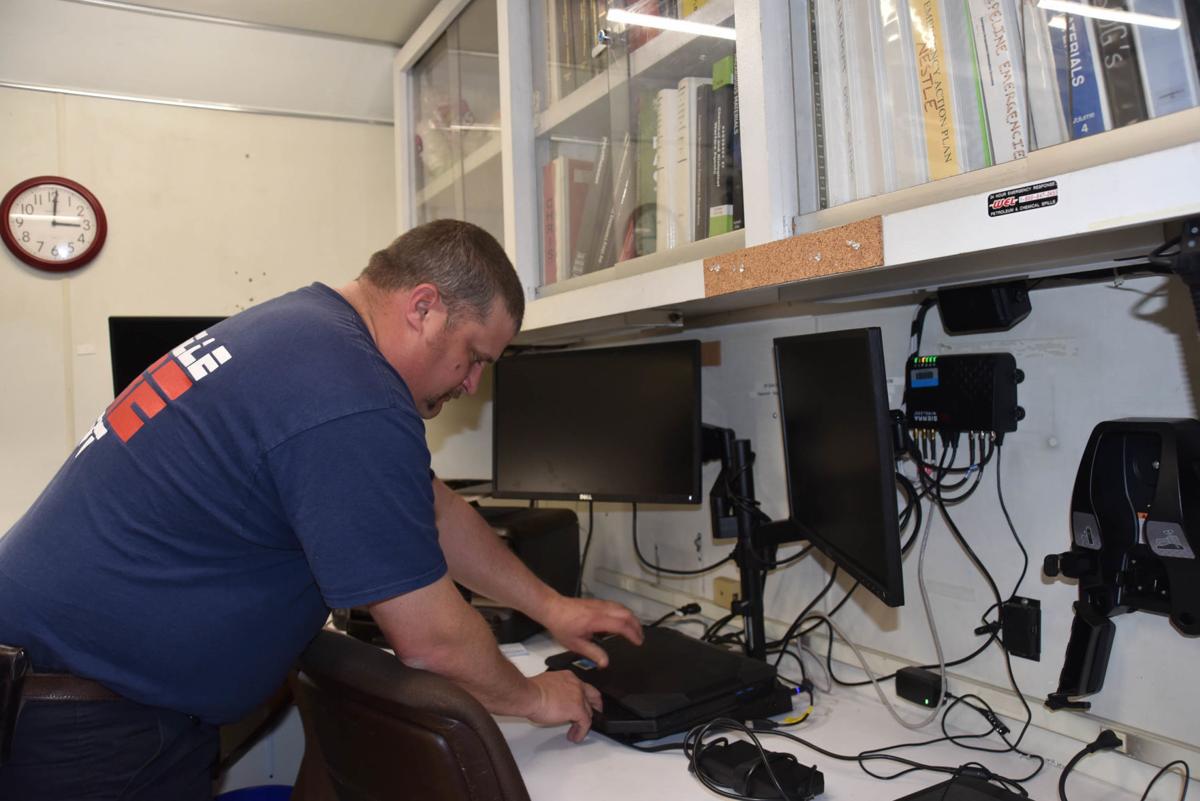 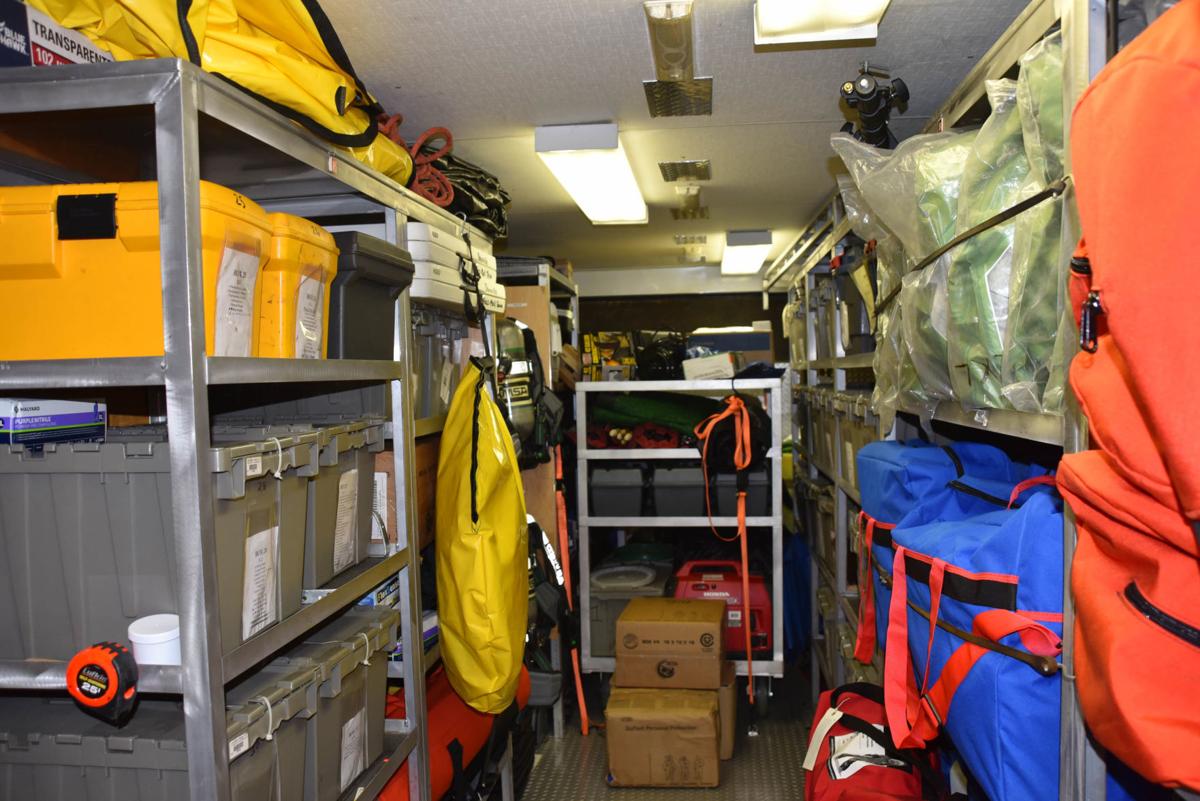 Officials show off the inside of a hazmat tractor-trailer, and the hundreds of items used during a containment situation Tuesday at Danville Fire Station No. 7. 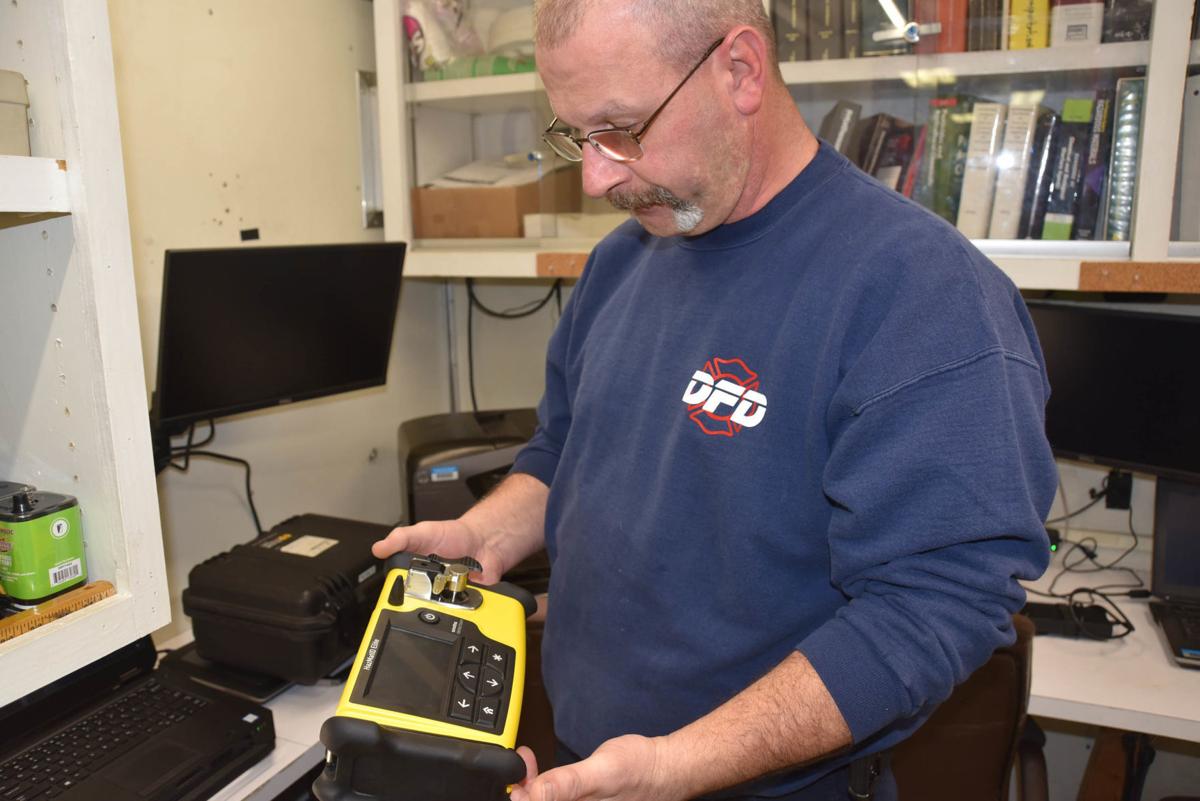 Kevin Farris shows how to correctly use a HazMatID scanner on Tuesday at Danville Fire Station No. 7.

Tyler Capps uses a vinyl hazmat suit to show the difficulty of using hands inside the suit on Tuesday at Danville Fire Station No. 7.

Kevin Farris shows of a draeger tube used by the hazmat team to identify different chemicals Tuesday at Danville Fire Station No. 7.

Officials show off the inside of a hazmat tractor-trailer, and the hundreds of items used during a containment situation Tuesday at Danville Fire Station No. 7.

Kevin Farris shows how to correctly use a HazMatID scanner on Tuesday at Danville Fire Station No. 7.

It’s a two-man job to get Tyler Capps, a Danville firefighter and hazardous materials specialist at station No. 7, into the huge vinyl suit made to protect him against acid and other corrosive chemicals.

He must first step into the suit, before pulling it up over himself. His coworker, firefighter Kevin Farris, has to hold onto the arms and zip up the back.

In addition to working throughout the city, the hazardous materials response team also works for the Virginia Department of Emergency Management as one of 13 regional response teams throughout the state. They cover a 75-mile range from Patrick County to Mecklenburg County.

“By having one in the Piedmont area we don’t have to wait for a team to come from Richmond,” Danville Assistant Fire Chief Timothy Duffer said. “We can get on the scene to mitigate the problem.”

The hazmat team, headed by Duffer, is tasked with containing and stopping anything considered a hazardous material. This can be anything from clouds of chlorine gas to milk pouring from a container truck.

“Believe it or not large quantities of milk is hazardous,” Farris said, after a soft chuckle. “If it gets into the water system and starts killing fish, it’s environmental [hazard] and it’s hazmat.”

The job of the hazmat team is to keep a situation from growing.

“We don’t do cleanup, we do more stop and containment” Duffer explained. “We keep it from further damaging the environment in any way.”

A recent example of containment happened during last week’s flooding in Danville. Floodwaters swept away a 200-gallon petroleum tank and it began to leak. The response team arrived — dressed in outfits that resemble hip waders to keep water and oil off their skin — and turned the tank the correct side up.

Danville Fire Station No. 7, home of the hazmat unit, is located near the Danville Regional Airport. It also houses the equipment used by the hazmat unit. This equipment consists of a computer system with a chemical database, hazmat suits and glass test tubes that can be used to test chemicals. The hazmat team also uses a machine called the HazMatID elite, a handheld scanner that shoots a laser through a chemical and develops a profile of what it is.

The hazmat team consists of 30 members, all trained to stop and contain hazardous materials.

Everyone at Station No. 7 is a member of the hazmat team, but they primarily spend their time training or responding to emergency calls. Hazmat calls are generally few and far between.

“I think you’re probably looking anywhere from 10 to 30 calls a year,” said Ronnie Willis, and engineer and assistant team leader.

The average day for a member of the station seven consists of responding to emergency calls, maintenance work, and going through inventory for hazmat items stored in tractor trailers.

“Pretty much every day we’re out in the trailers doing something,” Willis explained.

When the team is called out to contain a hazardous material, there’s no telling how long it will take them.

“When we leave here we have to be self-sufficient,” Willis said. “I always pack a bag for three days, you got to be able to sustain yourself for three days.”