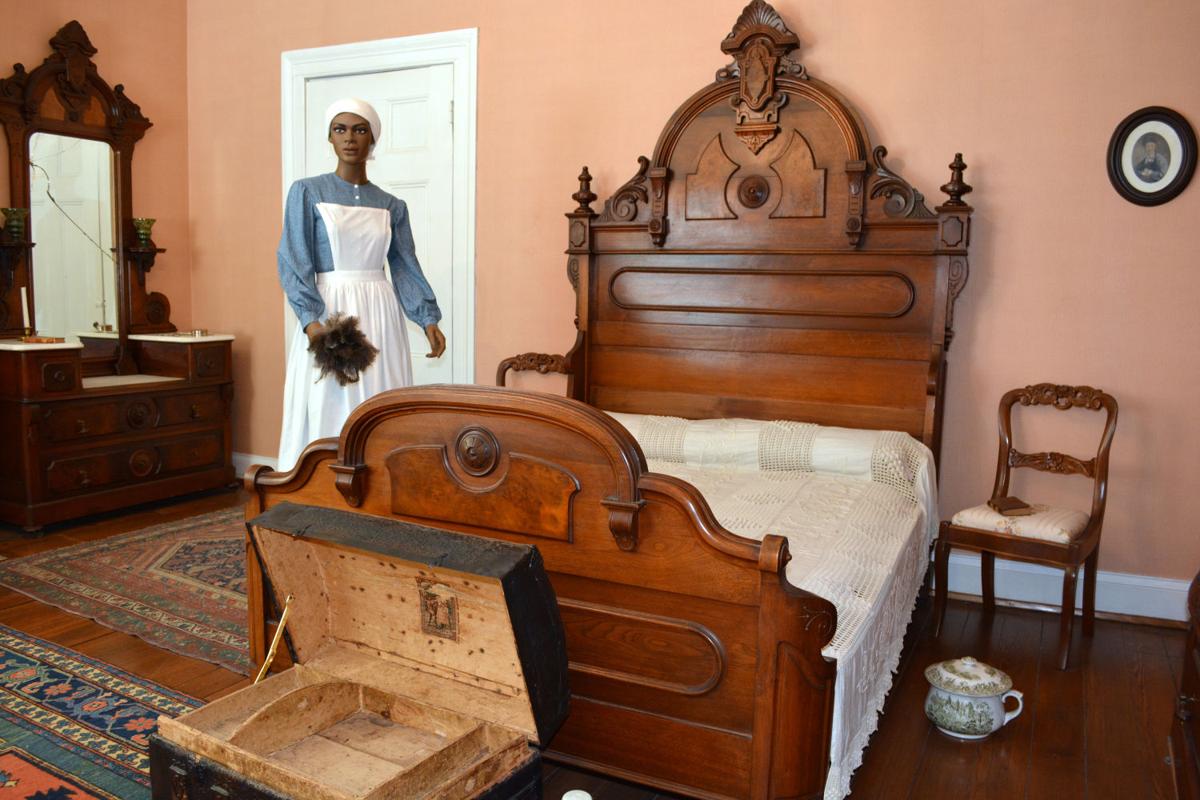 President Jefferson Davis stayed in this room in the Sutherlin Mansion from April 3-10 in 1865. 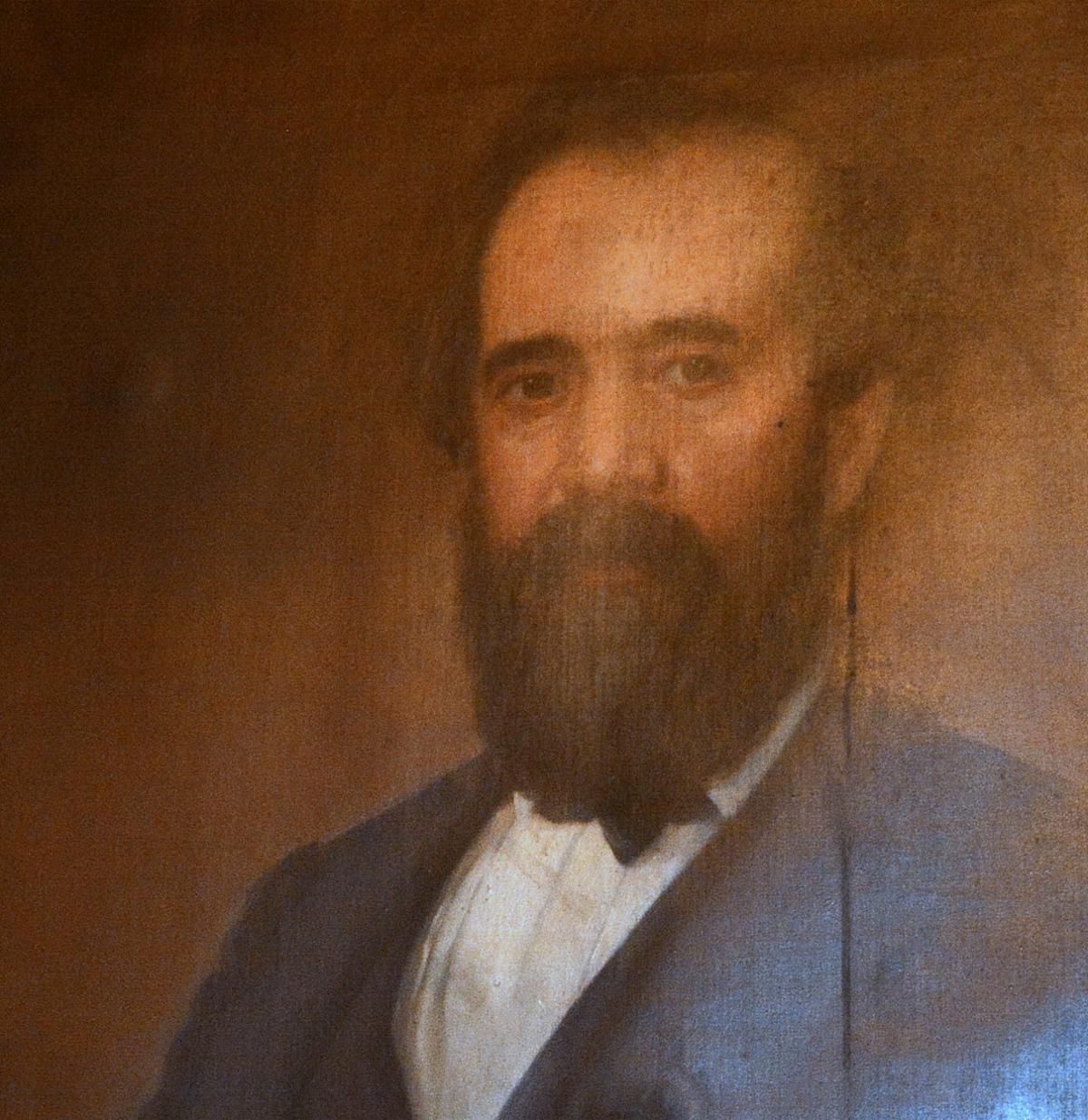 A painting of Maj. William T. Sutherlin hangs over a fireplace in the study at the Danville Museum of Fine Arts and History.

A painting depicting the fall of Richmond on April 2, 1865 is kept at the Danville Musuem of Fine Arts and History in the Sutherlin Mansion.

Patti Okeefe/Special to the Register & Bee
1 of 2

President Jefferson Davis stayed in this room in the Sutherlin Mansion from April 3-10 in 1865.

A painting of Maj. William T. Sutherlin hangs over a fireplace in the study at the Danville Museum of Fine Arts and History.

Second in a series of stories looking back at the ‘Last Capital of the Confederacy.’

Relocating the Confederate government to Danville was not a last-minute, hasty decision. Gen. Robert E. Lee and Confederate President Jefferson Davis had met in Richmond on March 4 and 5, 1865, to discuss plans of relocating to Danville if Petersburg must be abandoned, which Lee told Davis was only a matter of time.

It is well documented that Danville had been selected as the next capital of the Confederacy long before Richmond fell, said Lawrence McFall Jr., a Danville and Civil War historian and author of “Danville in the Civil War.”

And when Davis was handed a dispatch while in church in Richmond on April 2, 1865, that Petersburg was no longer defensible and Richmond must be evacuated, it was time to enact that plan.

“I take issue with those who characterize the government’s withdrawal from Richmond as ‘flight.’ At best, it has been referred to as ‘organized chaos’ and I agree because of the March contingency plans,” McFall said. “The plan was always to get to Danville and get the Roanoke and Dan rivers between them and Grant. It was agreed that Danville would be the point of emphasis and, of course, the government would stay with the Army.”

Davis’s wife, in fact, had already left Richmond by train, transferred to another one in Danville and then continued on to Charlotte, North Carolina.

Roar of cannons coming to Danville on Saturday

The sounds of cannons will echo throughout the River District Saturday afternoon and evening.

McFall cites several reasons in his book why Danville was chosen as the location of the new capital:

» With its location on the North Carolina border, it appeared to be militarily defensible with the armies of Lee to the north and the troops of Confederate Gen. Joseph E. Johnston moving northwest through North Carolina.

» The repair shops of the Richmond and Danville Railroad were located in Danville.

» All of the equipment from the Richmond Arsenal had previously been sent down from Richmond, except the barrel rolling machine, making the re-supply of the Army practical.

» The railroad and the telegraph allowed Danville to be in daily connection with Richmond. The telegraph communication was maintained with Richmond until April 5; after that, there was telegraph only from the South.

McFall added there also was infrastructure in place in Danville.

“The Danville Arsenal was here and probably maintained a larger stock of smaller weapons than any place in the South,” he said. “It was located within 100 yards of where the current Science Center is. It was built in 1862 and employed about 115 men.”

The arsenal repaired and issued weapons, fabricated accoutrements, assembled bullets and paper cartridges for rifle muskets and produced firearms, according to information in the “Between the Lines, 1861-1865” exhibit at the Danville Museum of Fine Arts and History, housed within the Sutherlin Mansion.

In his book “The Last Capital,” John Brubaker III adds a psychological reason to moving the Confederate government to Danville: Davis wanted to keep the capital inside of Virginia to avoid damaging the credibility of the Confederacy and laying open the most powerful state in the Confederacy to “political attack from an active peace party.”

Danville at the time was the fourth largest city in Virginia.

“Everyone knew where Danville was and its reputation was well-known throughout the state,” McFall said.

In addition to these reasons to move to Danville, the military plan at the moment of leaving Richmond was for Lee to join his army with that of Johnston; defeat Union Gen. William T. Sherman, who was in North Carolina; and then turn back north and defeat Union Gen. Ulysses S. Grant’s army, whose advance would have been slowed by the Dan and Roanoke rivers, he explained.

A city prepared for its destiny in history

However future generations view the appellation of “Last Capital of the Confederacy,” history cannot be rewritten and reroute the train of Confederate President Jefferson Davis to a city other than Danville.

Danville, however, was still a little overwhelmed by the nine trains of eight- to 12-cars apiece that pulled into the railroad station from Richmond. Davis’s train had taken 18 hours to make the 140-mile trip.

Providing lodging for the hundreds of arriving government officials and workers seemed an impossible task for the over-crowded town until some of the wealthiest citizens stepped forward and offered their homes.

“No, no, no, the city wasn’t ready. There wasn’t enough lodging, and there was not enough food,” said McFall. “In fact, procurement officers worked daily in the days after to find food for the visitors.”

McFall recounts in his book that Davis said he received “an old Virginia welcome” when he arrived in Danville and nothing could possibly exceed “the kindness and hospitality of the patriotic citizens of Danville.”

The mayor led a welcoming committee down cobble-stoned Craghead Street to meet the train as wagons, trains and other vehicles waited to transport them to their quarters.

The homes and hotels throughout the city burst at the seams with the visitors — many of the homeowners boasting the last names of the streets that still carry their names: Patton, Wooding, Keen and Paxton. Hardly a house in Danville didn’t house a guest.

To the home of William T. Sutherlin and his family rode President Davis in the Sutherlin’s carriage. Secretary of the Treasury George Trenholm and his wife, Anna; Secretary of the Navy Stephen Mallory; and his staff members, Frank Lubbock, John Wood, William Johnston, Micajah Clark and Dr. Garnett, were also guests at the Sutherlins.

The home, built in 1859, was the grandest home in Danville at the time. Situated on four acres, it was surrounded by gardens and the usual amenities of an urban plantation, such as a kitchen, carriage house, greenhouse, slave quarters and stable.

Richmond architect Frank B. Clopton designed the unique mansion for Sutherlin and his wife, Janie, and it is recognized as “one of the finest examples of Italianate architecture in Virginia,” according to the museum’s brochure.

Sutherlin was barely 36 years old when the mansion was built and had made his fortune from tobacco, banking, textiles, real estate and railroad development. He was both an alderman and mayor in Danville and a delegate at the Virginia Convention who helped decide the state’s position on secession.

During the Civil War, he served the Confederacy as quartermaster of the district, poor health preventing him from serving actively.

The Sutherlins formally met Davis when he reached their home and escorted him to his lodgings upstairs, one of the mansion’s four bedrooms, according to Brubaker. He inquired of news from Lee, of which there was none, then sent a telegram to his wife in Charlotte, informing her of his safe arrival in Danville.

Then after dinner in the dining room, he retired for a night’s rest to the first bed he had seen in two days of travel.

The next day he got busy trying to re-forge a future for the Confederacy out of the bleakness of the present events and from the new capital.

Love of Southern heritage: Organizations work to dig into the past

The Confederacy holds a special place in the hearts of many Southerners, especially members of heritage organizations.

Even in defeat, proclamation’s words used to rally the troops

Taking a seat at a marble-top table in the quiet solitude of William Sutherlin’s library, Confederate President Jefferson Davis began to write a proclamation. Whether Davis knew it would be the last of the Civil War is unclear.

The descendant of Confederate President Jefferson Davis returned to Danville to mark the 150th anniversary of the city’s period as the final capital of the Confederacy.

PHOTOS: 150 years in the making, hundreds turn out for Old South Ball

PHOTOS: Stepping back in time 150 years, the Sons of Confederate Veterans played host to the Sesquicentennial Old South Ball on Saturday evening at the Danville Community Market.

From the moment Confederate President Jefferson Davis’ train headed to Danville as Richmond fell during the Civil War, tales have been spun about a vast treasure also leaving Richmond — and treasure hunters all over the country have been looking for it ever since.

A town at the epicenter of history

Though the time of day may change by historical account, most agree Confederate President Jefferson Davis arrived in Danville on April 3, 1865. The president arrived with a half-dozen cabinet members and other supporters to a crowd of citizens at the railroad depot on Craghead Street.

Closing the door on the Last Capital

After arriving in Danville on April 3 and setting up the Confederate government in its new capital, Confederate President Jefferson Davis waited almost one week to hear from Gen. Robert E. Lee.

Learning lessons from the Civil War

April 1865 was a pivotal month in United States history — with an important part of that history unfolding in Danville.