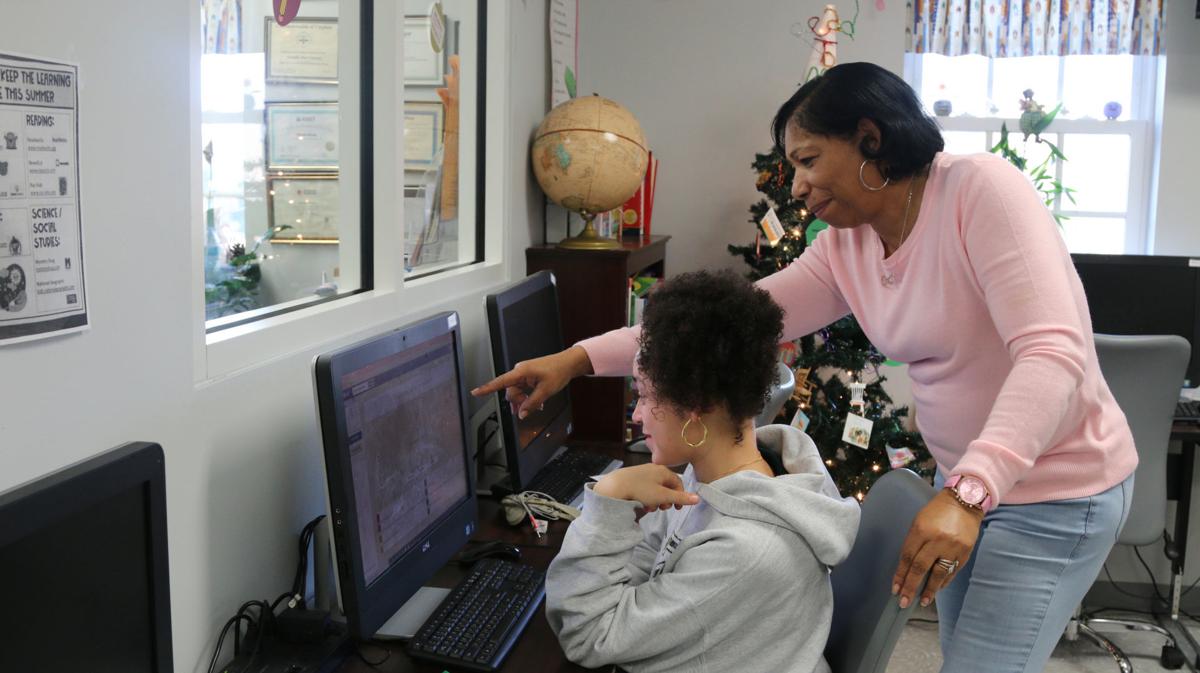 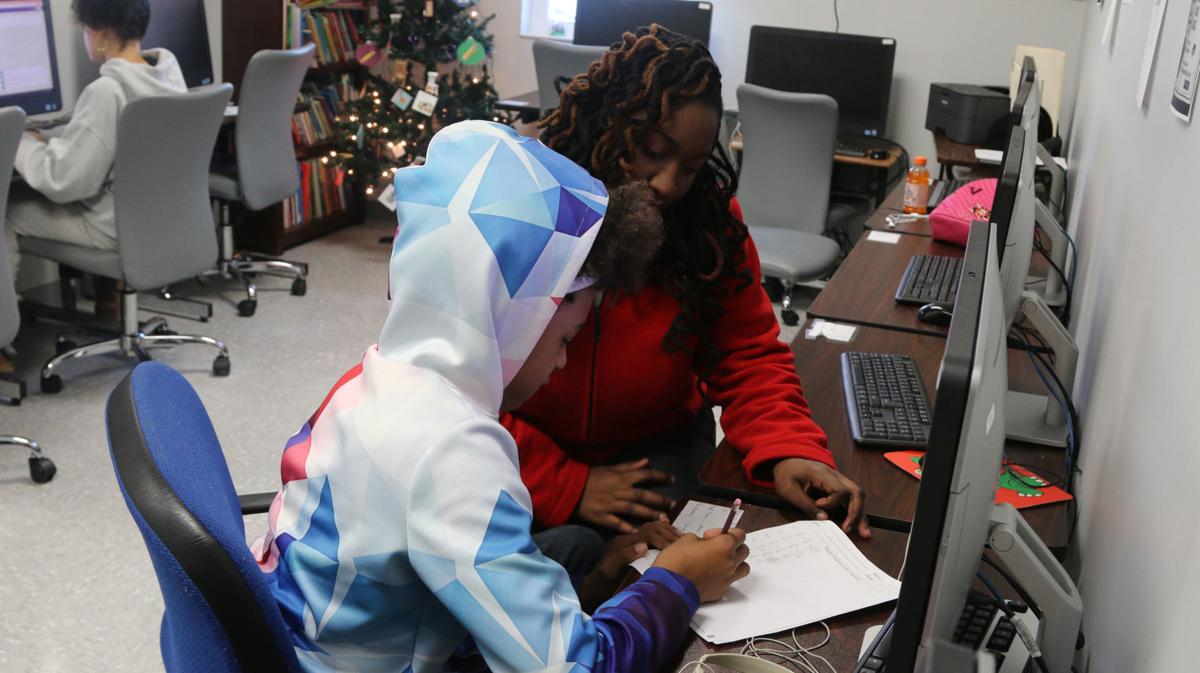 Antonio Matos (left) gleans knowledge from Paige Warren, who instructs students at Seeland Crossing who ask for help with their schoolwork. 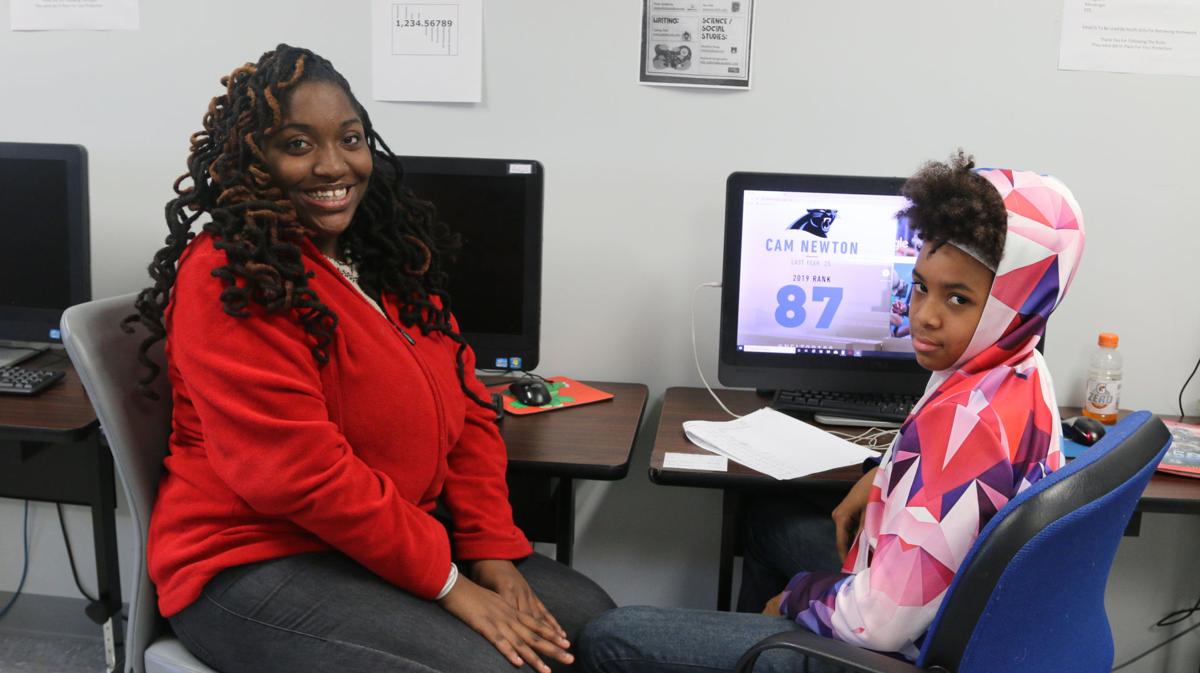 Antonio Matos (left) gleans knowledge from Paige Warren, who instructs students at Seeland Crossing who ask for help with their schoolwork.

Danville has long been known as the “city of churches.”

That, combined with a conference, helped to launch a youth program more than two decades ago.

In 1996, Kenny Lewis, who at the time served as an assistant principal at Westwood Middle School in Danville, went with other Danville Public Schools officials and city leaders to a conference in Arlington. The meeting taught educators various ways to support students after the school day ended in order to help lower dropout rates.

One speaker in particular caught Lewis’ attention. His name was Donald Hunter, founder of the Louisiana Church-Based Tutorial Program.

“I was so intrigued by it because the faith community was so impactful to my life,” Lewis said, “I said, let me go check this out.

He said it was an eye opener.

“It fit Danville perfectly,” Lewis said. “So we’re known as the city of churches and I certainly feel like the church is one of the pillars of our community.”

Hunter worked at the state department and as a Baptist minister in Baton Rouge, Louisiana. Lewis said he felt God call him to collect data on area dropout rates, attendance rates, teen pregnancy rates and other statistics facing young people

“What he did, what he said he felt compelled by God to do, was in his church, his Baptist church, to start an after school tutoring program in the neighborhood where those kids are, where he had his church,” Lewis said. “So he targeting them. He targeted those kids and said he couldn’t believe what low self-esteem they had when they came into the program. But after they went to that program, it would build their self-esteem. It would build their confidence. They were coming through the door, ‘Look at my report card. Look at what I did.’ It was so impactful.’”

News of the Baptist church’s ministry quickly spread throughout the state. Over several years, Hunter’s model instructed about 500 interested church and community groups throughout Louisiana on being safe places for children to learn in academic areas that challenged them.

“It grew over about a 15 to 20 year period. He said it just grew and it turned things around in his state,” Lewis said. “It had such an impact that the local, state and federal government got involved and recognized the model.”

Inspired by the change in the Pelican State, Lewis spoke with the team at Danville Public Schools. They agreed to have Hunter come to Danville to teach the model to Lewis and others interested.

Going on 24 years, the Danville Church-Based Tutorial Program, under the direction of Lewis, now offers about 500 students an after-school resource at more than 40 locations — including churches and community centers — throughout the city, Pittsylvania County and Caswell County, North Carolina.

“At the heart of it is to reach out into our community, in our neighborhoods, to give students help with homework and tutorial assistance,” Lewis said.

The program also works with teens determined to graduate high school on time, offers summer enrichment opportunities and helps children get involved in various after school activities that interest them.

“It’s amazing how it’s had an impact. I’ve had parents come to me crying, saying, ‘What have you done to my child?’” Lewis said. “They have recognized they’ve turned around. They’ve begun to feel good about themselves. When they go to school, they’re not embarrassed about not having their homework or not knowing how to do it. It’s amazing how things have grown.”

At the group’s Seeland Crossing meeting place in Danville, upward of 17 students meet to complete their homework, ask questions about their lessons and learn in a space with others their own age.

Yasmine Matos, a seventh grade student at Westwood Middle School, has been in the program for about a year. She and her brother, Antonio Matos, a sixth grader at Bonner Middle School, take part in the tutorial program.

“I like being with everybody,” Yasmine said. “We learn math, all of the subjects, and we work on homework.”

Antonio also enjoyed congregating with other students after school. He noted the program helped him improve his grades.

“When I came here, I had a B in reading. I worked on handwriting so I could get better,” Antonio said. “Now I’m a straight A student.”

“The lesson might be over with in school, but if you didn’t get it, it’s pointless if you need it later on,” Warren said. “In school, I struggled sometimes. Sometimes, teachers can’t help you because they’re so busy. Plus, I’m younger. I’m closer to their age. I think that helps us connect a little bit. It feels good when you have someone who can relate to you.”

Youth coordinator Wonda Graves said students who come to the center often work on math, grammar, foreign languages and reading comprehension, as well as any other subjects. It’s paramount to her to offer a safe place for education, where the children know they will be taken care of.

“The tutorial program has helped a lot of kids. It really has. I like doing the tutoring with them and helping them. I love when they come in and they got a C this time, well, ‘I got a B this time,’” Graves said. I tell them, just apply yourself. Don’t get upset because a lot of times when you get upset, you get that ‘I can’t do it’ mind. Just go ahead and put confidence in yourself first and you can do it. And they do that.’”

In the coming months, Lewis hopes to broaden the reach of the Danville Church-Based Tutorial Program.

“We’re really encouraging more churches to step up and become part of the church-based tutorial program. We’ve really been blessed with grants so when a church says they want to become a part of the church-based tutorial program, we will provide the training for their staff,” Lewis said. “Each church has to come up with its own staff because it’s a partnership recognized as an outreach of their church. We will come in and train that staff. We will come in and make sure they have a network computer lab setup. We will give them an educational budget to buy any educational supplies.”

Snacks for the students are also provided by a partnership with God’s Pit Crew. ◆

Those interested in being a host location for the program or those hoping to get children involved can learn more online at www.dcbtp.com.