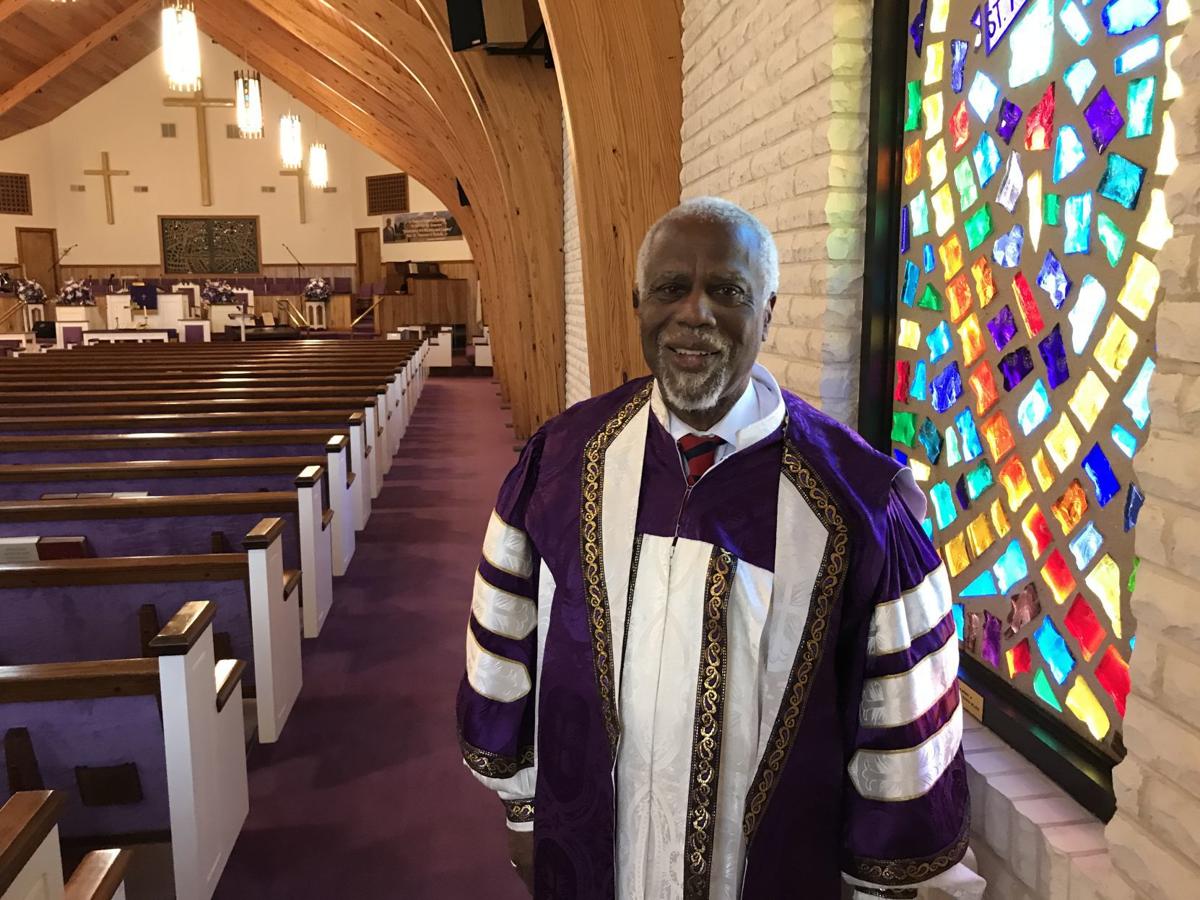 The Rev. Thurman Echols, who has been the pastor of Moral Hill Missionary Baptist Church since 1976 and also heavily involved in the life of the community, has announced that he will retire at the end of this year. 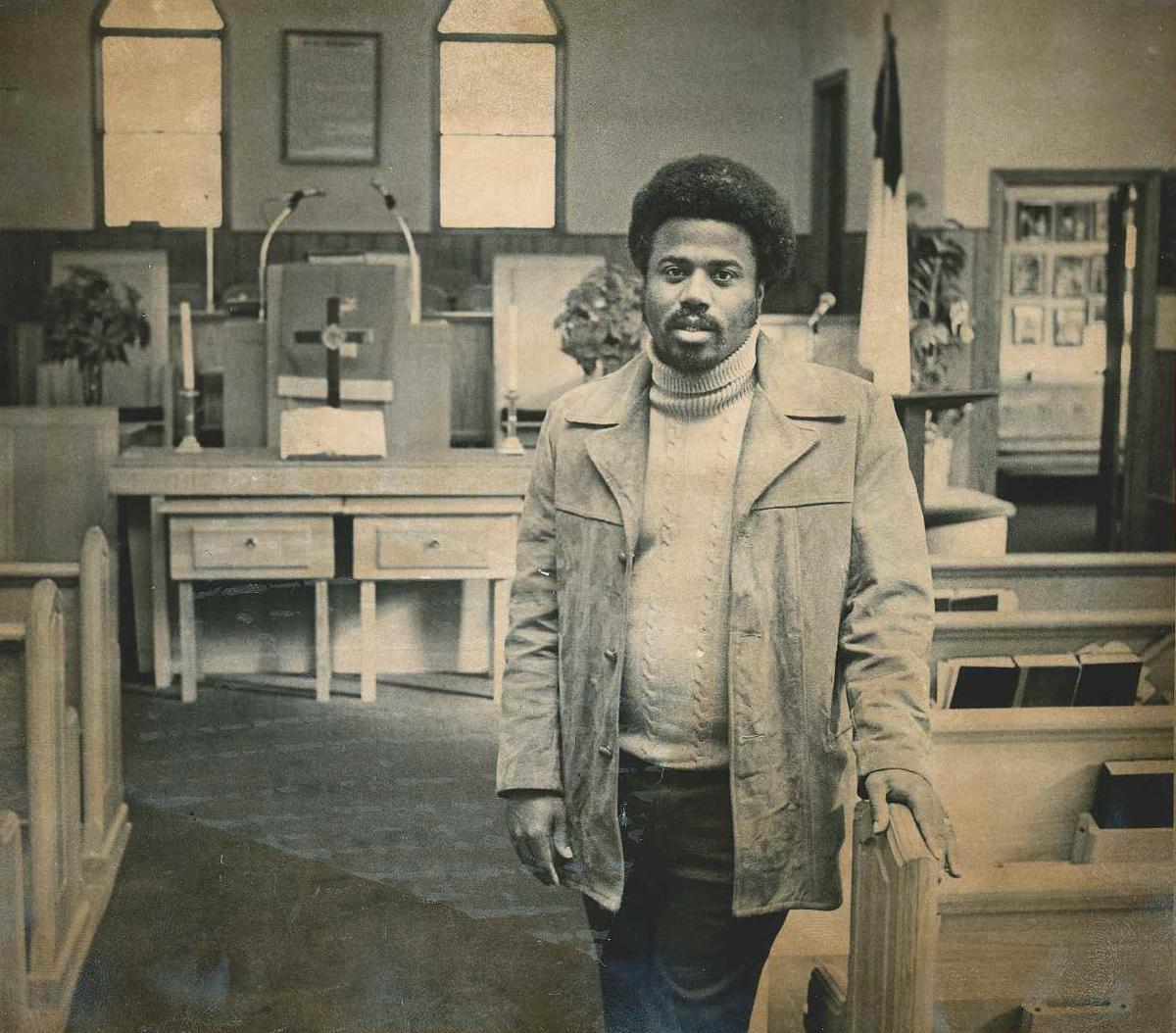 In this 1979 Bulletin file photo, the Rev. Dr. Thurman Echols is in the old sanctuary of Moral Hill Missionary Baptist Church in Axton. In 1983 ground was broken on a new sanctuary which was completed in 1989 and paid off in 1993. Echols will retire at the end of this year. 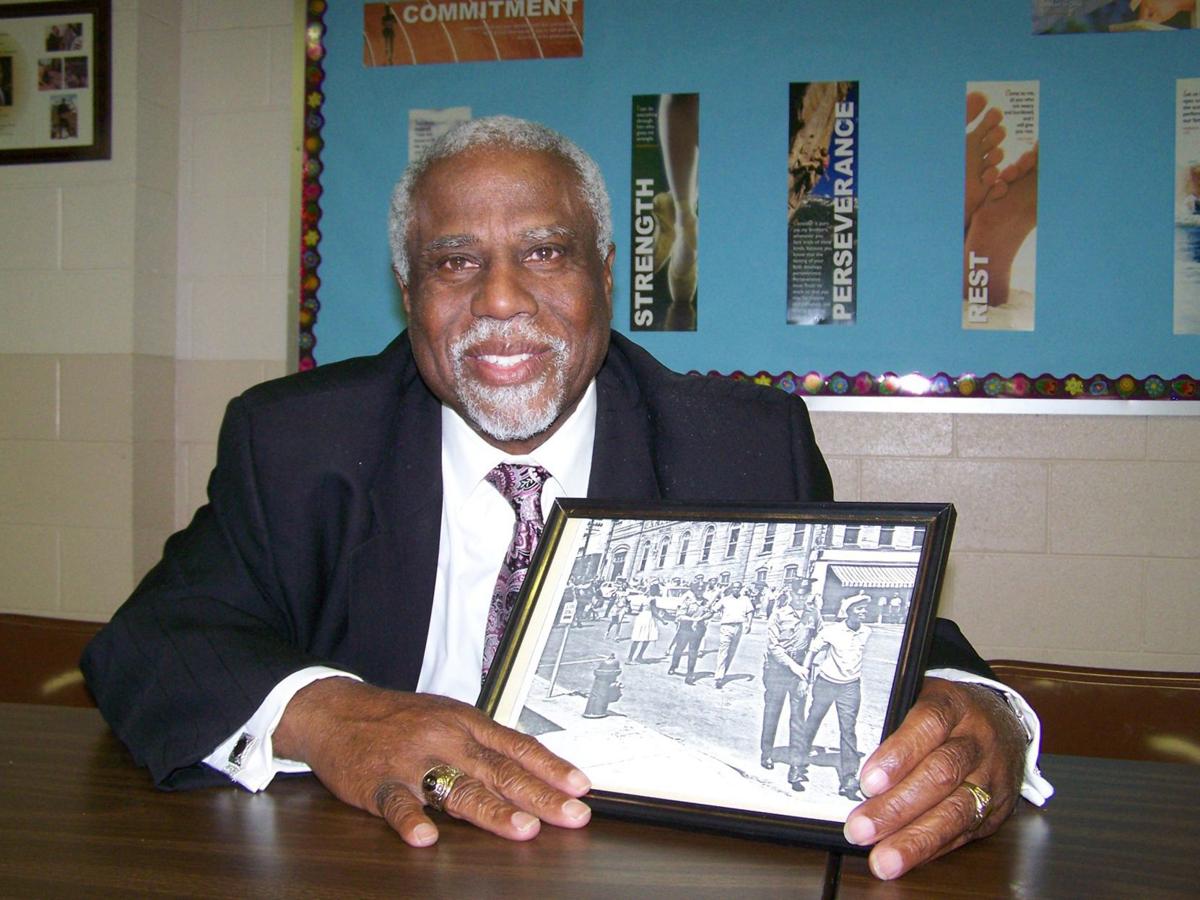 Thurman Echols holds a photo of himself when he was arrested in 1963. 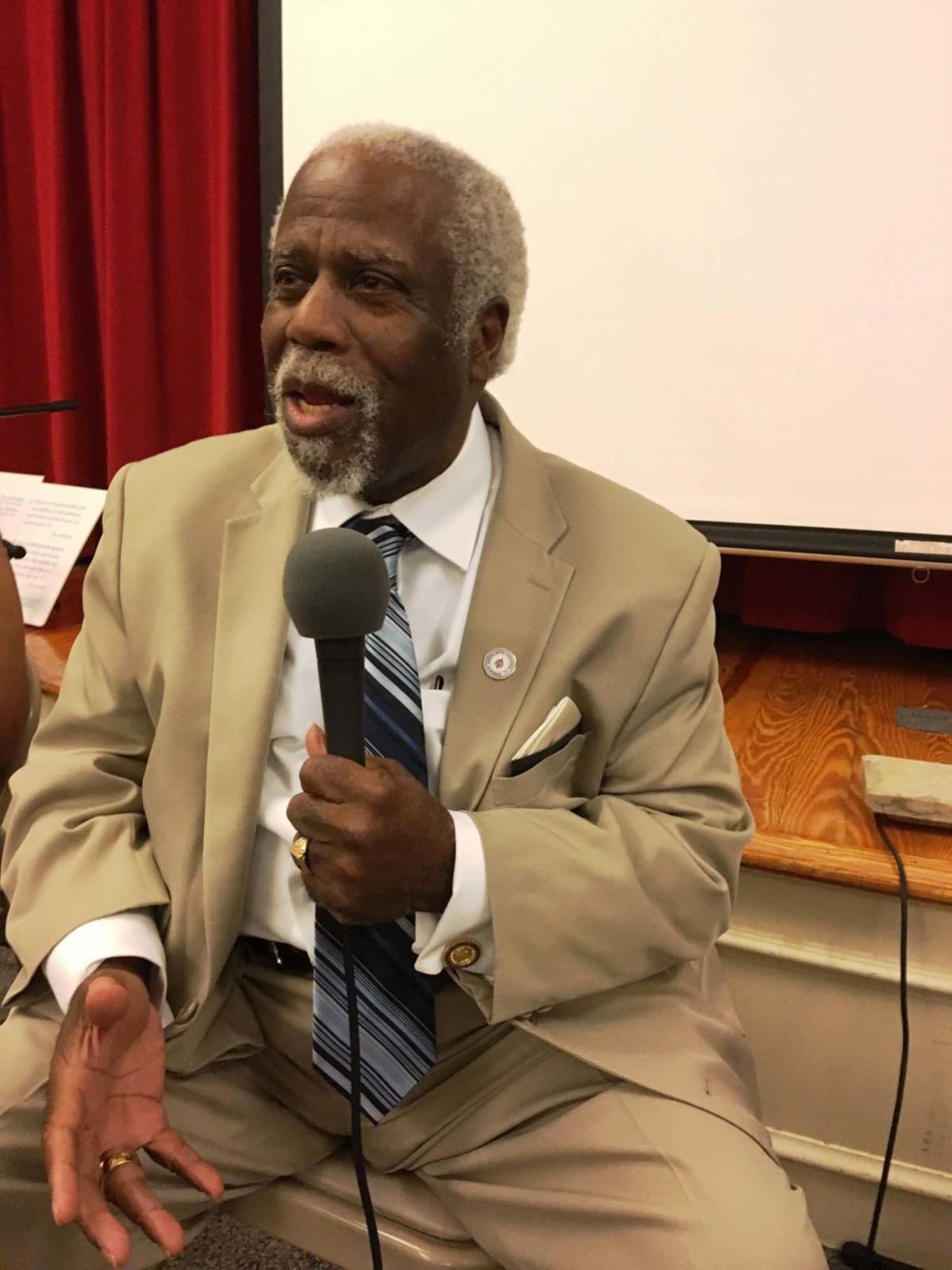 The Rev. Thurman Echols talks about Danville's cvil rights movement to a delegation of people from Charlottesville in 2018. 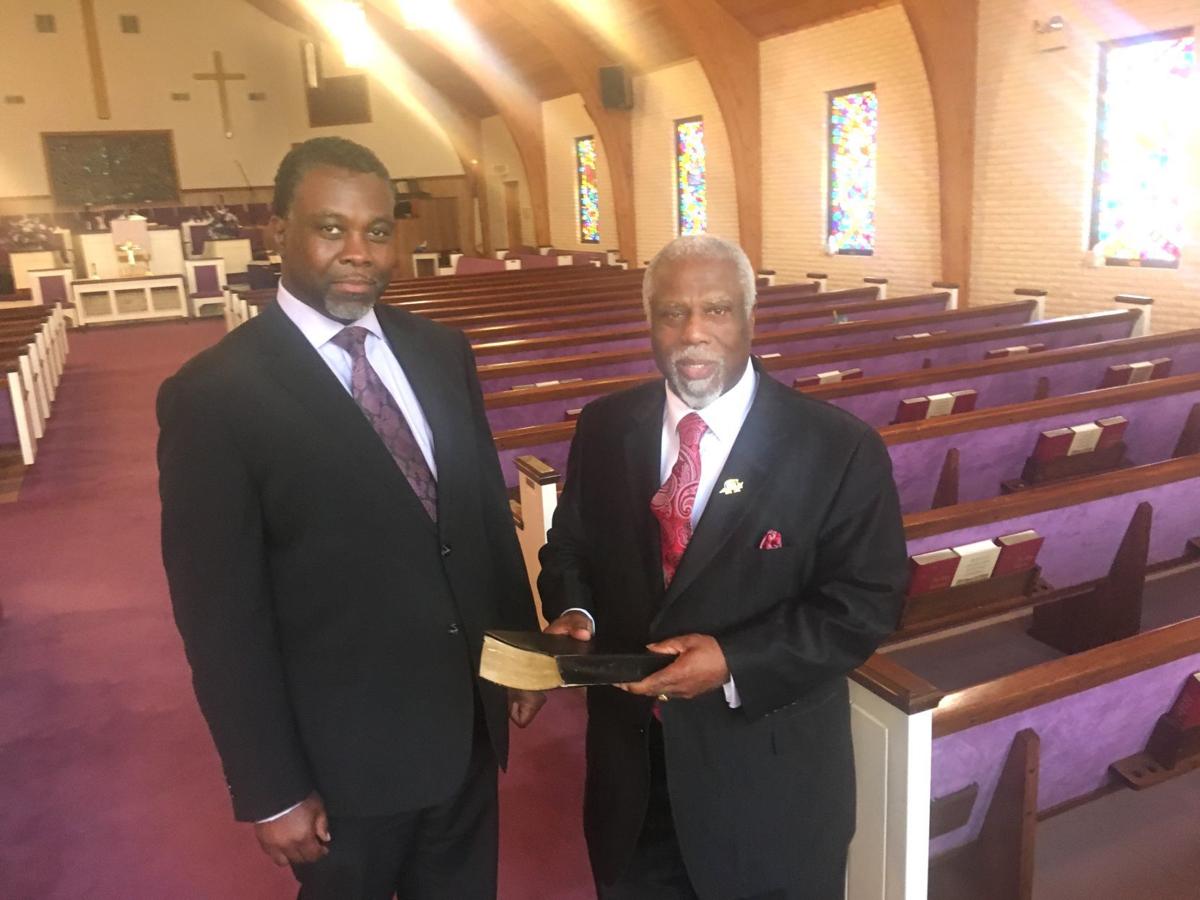 Area influencers in the Virginia Baptist State Convention have been the Rev. Charles Whitfield of First Baptist East Martinsville (left) and the Rev. Thurman Echols. Whitfield said Echols "has been an example of what it means to synergize faith-based obligation with social responsibility."

The Rev. Thurman Echols, who has been the pastor of Moral Hill Missionary Baptist Church since 1976 and also heavily involved in the life of the community, has announced that he will retire at the end of this year.

In this 1979 Bulletin file photo, the Rev. Dr. Thurman Echols is in the old sanctuary of Moral Hill Missionary Baptist Church in Axton. In 1983 ground was broken on a new sanctuary which was completed in 1989 and paid off in 1993. Echols will retire at the end of this year.

Thurman Echols holds a photo of himself when he was arrested in 1963.

The Rev. Thurman Echols talks about Danville's cvil rights movement to a delegation of people from Charlottesville in 2018.

Area influencers in the Virginia Baptist State Convention have been the Rev. Charles Whitfield of First Baptist East Martinsville (left) and the Rev. Thurman Echols. Whitfield said Echols "has been an example of what it means to synergize faith-based obligation with social responsibility."

MARTINSVILLE — With some of the goals he long has fought for having been achieved, and others still needing advocacy, the Rev. Thurman Echols, a longtime pastor and community leader, is retiring.

Echols, 72, grew up amid the fire of the civil rights movement in Danville, then spent the majority of his adult life as pastor of Moral Hill Missionary Baptist Church in Axton, with a ministry reaching far beyond the church’s walls.

“The pastor needs to be involved with the affairs and in the lives of the people he or she pastors,” Echols said. “You can make a difference.”

His vast involvement in the community has led to being recognized several times for his efforts, including the Jack Dalton Community Service Award in 2007. The Henry County Board of Supervisors wrote in nominating him for that award: “Rev. Echols gives guidance, inspiration and moral and tangible support, always listening to others in the process.”

It is important to be a voice for others in the community, Echols has said. “Someone needs to speak up in their behalf,” Echols said. “You need to shake the apple tree that other people might be able to get the apples.”

Echols “has been an example of what it means to synergize faith-based obligation with social responsibility,” said Charles Whitfield, president of the Virginia Baptist State Convention and pastor First Baptist Church East Martinsville.

As a child, “one of the things I have been very blessed and fortunate for” was living five minutes away from the William F. Grastly branch library, which was for black people. Not only did Echols patronize the library often, but as a teenager, he worked there as a page.

Another treasure he recalls was being part of Calvary Baptist Church, where members represented “any profession in the black community,” including lawyers, doctors, nurses, teachers and bankers.

Those professions had not been within the reach of his parents, although they would raise their children to pursue them. His father worked at Dan River Mills, and his mother, who had grown up in a sharecropping family, worked in a tobacco factory, then as a maid in the school system. Echols said he remembers her crying in regret for not having been able to get an education.

What she did have, however, was “integrity and discipline. She just had what it took to be a good role model and mother,” Echols said.

“Sometimes there are two factors that shape the lives of an individual:” family and environment, Echols said, adding he was fortunate in both regards.

Echols became involved in student government, as the vice president and then president of the student body of John M. Langston High School.

The serious politics, though, came outside school, facing the difficulties and limitations of life under segregation. The teenaged Echols took part in various community efforts to abolish that separation of the races and the laws and practices which prevented black people from having the rights white people could take for granted.

It was the day after the March from Selma to Montgomery in Alabama, undertaken by 5 million people for voting rights. Violent reaction to the peaceful march led to the murder of James Reeb, a minister from Boston and various beatings.

The next day, 75 to 100 teenagers in Danville marched through the city to spread a message of support of “trying to integrate public facilities and accommodations ... and meaningful jobs for blacks” as well as integrating stores, Echols said. They carried a casket with a message: “Burying segregation.”

The police’s plan, Echols said, was to arrest the student leaders — which included Echols — in hopes the rest of the group would dissipate, but instead, in reaction to the arrests, even more people came out to protest.

But while that was happening both of Echols’ parents were arrested while at work for contributing to the delinquency of a minor. Supposedly, “they did not have me under subjection,” Echols said.

That summer became known as the “Summer of Discontent,” which stretched into fall with tragedies including the murder of four black girls in a bombing at 16th Street Baptist Church in Birmingham that September and the assassination of President John F. Kennedy in November.

Integration in Danville schools started in 1964. A few black students went to George Washington High School, but Echols didn’t, he said, because he didn’t want to leave his friends.

Echols was involved in the civil rights movement in many other ways, he said, and he has heard the Rev. Martin Luther King Jr. speak.

In January, the state dedicated a historical marker in Danville for Bloody Monday. It was Echols who had written the proposal for it.

Echols studied at Virginia Union University, from which he was graduated in 1969 with a degree in sociology. Then he was drafted into the military.

He served as a medic in locations including Fort Knox in Kentucky, Fort Sam Houston in Texas and Fort Jackson in South Carolina.

The couple had two children, Cicely Washington, a teacher in Hampton, and Phillip Granville Echols, a teacher in Apex, North Carolina, and each has a child. Diana Echols died in 2008.

After the military, he worked as a community-schools coordinator in Danville until he felt the call to go into the ministry, he said. He started at Duke Divinity School in 1974, and in 1976, he became the pastor of Moral Hill. He finished his religious education at Shaw Divinity School in the 1980s.

In later years Echols would be granted honorary doctoral degrees in divinity and humane letters from several schools, with the one most precious to him being from Virginia Union.

At Moral Hill, Echols has overseen a construction project that more than tripled the square footage of the church building, helped the church pay off its debts in 10 years and implemented special programs, including women’s day, men’s day and youth recognition programs.

Echols is a past president of the Virginia State Baptist Convention.

“One of the things I really cherish in my ministry” was taking two busloads of people to the inauguration of President Barack Obama, he said. “It was the biggest crowd that I’d ever seen in my life” — and that included comparison to the Million Man March, which he also had attended.

His church gave money to help establish the Axton Life Saving Crew, which began operation in 1993, and he was a president of its board and the board’s only lifetime member.

He has served on the Henry County School Board for eight years; was appointed by then-Gov. Mark Warner to the Child Abuse and Neglect Board of the Commonwealth of Virginia; has been the president of the local NAACP, was on the board of Piedmont Arts, including as board president; was president and chair of the capital campaign for United Way; was with the MHC Voters League; and, from an appointment by the Henry County board of supervisors, served on the board of Pittsylvania Community Action for 25 years, including some as its chair.

He was one of the first people to initiate Martin Luther King Day observances in the area.

He has been a member of the Omega Psi Phi Fraternity Inc., which named him its Citizen of the Year in 1998, and the MHC Men’s Roundtable has honored him with the Distinguished Service Award. He has been given the keys to the cities of Roanoke, Danville and Virginia Beach.

Others who are active in the community, such as Whitfield, have credited Echols with getting them started.

After Whitfield had been appointed to a local board, he learned it had been Echols who had recommended him. “This had opened literally dozens of other opportunities because of his confidence in my leadership,” Whitfield said.

When Echols announced in his church he would be retiring, “I don’t know if they believed me or not,” he said.

He will continue in his post through the last day of December.

Events to honor and say farewell to him will include a retirement gala on Dec. 21 at New College Institute and on Dec. 29 a service led by his brother, the Rev. Danny O. Echols, of Rising Valley Baptist Church in Gloucester.

Even though he’s retiring, “I can’t stop now. I want to still be involved in some areas of the community,” Echols said.

What they will be, though, he is not revealing yet.

He does, however, talk about personal interests, which include traveling, visiting people, including in rest homes, and photography.

Meanwhile, he has recommended that his church not make any hasty moves toward finding his replacement — and he’s definitely not going to get involved with making any recommendations, he said. That’s entirely up to the congregation.

Watch now: As protests continue, these 14 videos capture moments both tense and tearful

What is antifa and its role in police protests? To start, it's not one group.