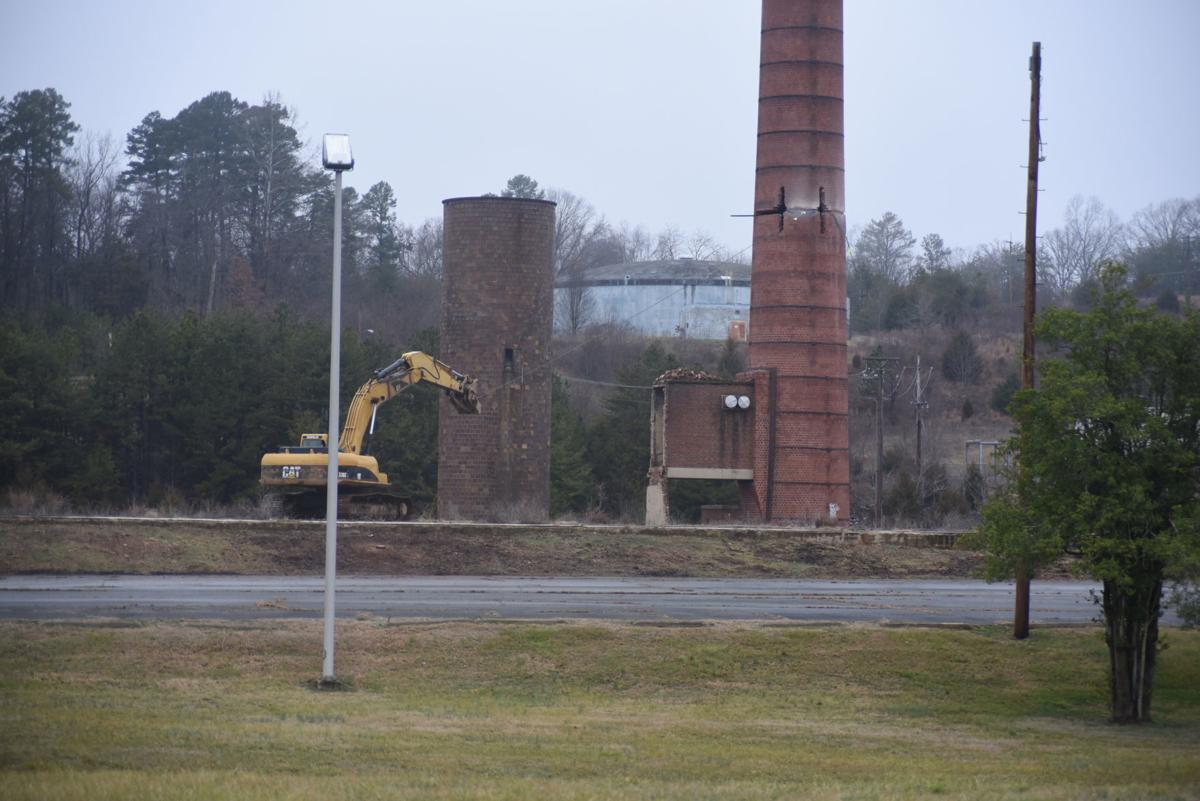 In their third try in five days, a demolition crew attempts to pull down a towering smokestack, a relic of the former Klopman Mills that stands squarely in the middle of the Southern Virginia Multimodal Park in Hurt. The tower didn’t fall Tuesday, but officials believe that the smokestack, which stands more than 100 feet tall, will tumble soon. 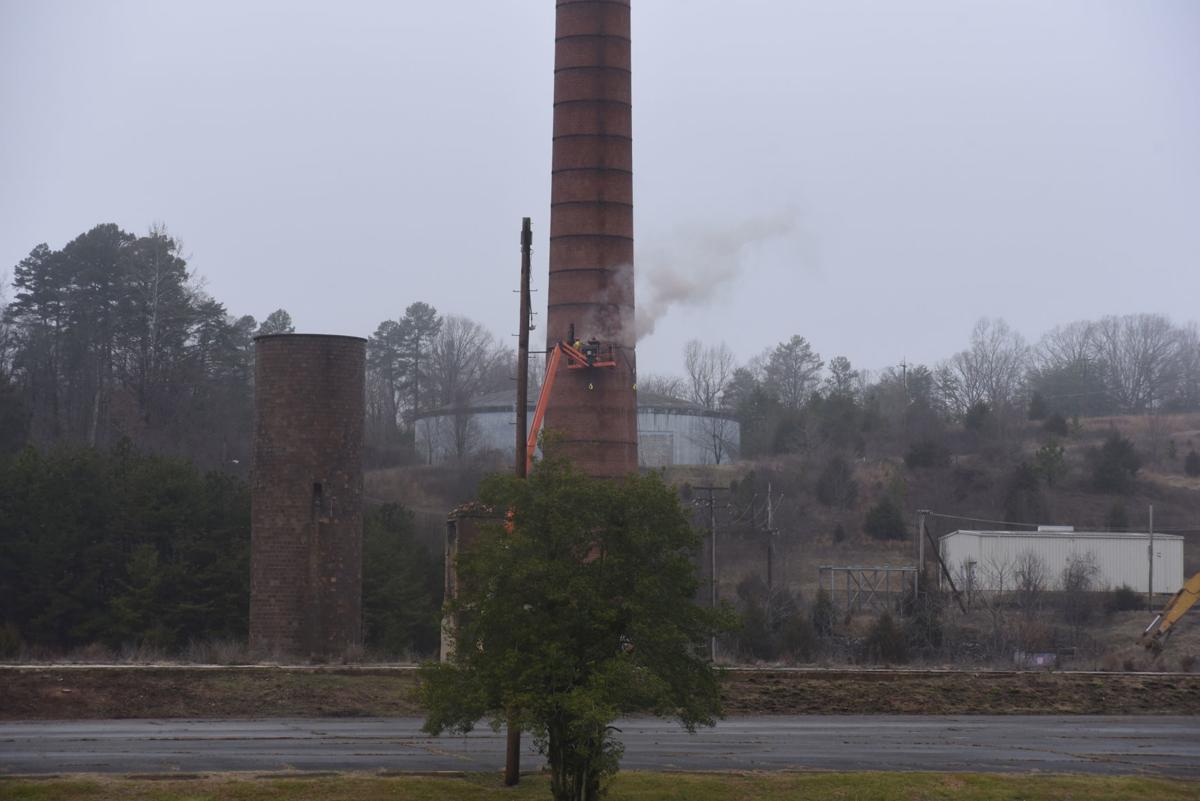 As the final efforts are made to restore the Southern Virginia Multimodal Park in Hurt, including the demolition of the smokestack from Klopman Mills, Pittsylvania County Economic Development Director Matt Rowe said that there are several “mature conversations” with potential tenants that are interested moving to the park.

HURT — A light fog hung in the air throughout the afternoon Tuesday as a demolition crew worked to take down a towering smokestack, the primary relic from the former Klopman textile manufacturing plant.

Dozens of onlookers pulled their cars over off of Main Street in Hurt and watched the crew work, hopeful to see the towering structure, which is well over 100 feet tall, collapse to the ground.

“[The smokestack] is a memento from the past that they’re going to destroy,” said Glen Harris, who worked at the factory for 33 years before it shuttered in 2007. “You just hate to see things change so much.”

Crews were unsuccessful in attempts to pull the old, towering smokestack down on Friday and Monday. The attempt on Tuesday fared no better — the smokestack still stood at the end of the day. But officials believe the structure will be demolished soon, which will help pave the way for another employer to take the plant’s place at the Southern Virginia Multimodal park.

“It just closes the chapter on one story and moves us to start telling the next,” said Pittsylvania County Economic Development Director Matthew Rowe.

After years of planning, the Staunton River Regional Industrial Facility Authority was officially formed by the city of Danville, Pittsylvania County, the town of Hurt and the town of Altavista last year in an effort to restore and attract business to the 800-acre Southern Virginia Multimodal Park, the former home of Klopman Mills. The town of Altavista dropped out late in 2019.

On Tuesday afternoon, Harris stood in one of the former plant’s parking lots, fondly remembering his time at the plant and watching as a demolition crew on a cherry picker cut into the brick sides of the smokestack.

“I had every intention of retiring from here,” he said, noting he now works at Grand Plastics in Altavista.

Most of Klopman’s buildings are gone, leaving a desolate area of cracked pavement that is mostly ready for new businesses to move in. With designations as a Virginia Enterprise Zone and federal Opportunity Zone, Rowe said there are “mature conversations” with multiple potential tenants interested in the site.

One of the onlookers was 87-year-old Clyde Queen, who worked at the plant from 1950 to 1990 in a variety of roles. He said the plant’s shuttering and current state “breaks my heart.”

In addition to the emotional element of watching the last piece of a former Hurt mainstay fall, there is some symbolism in waiting for the structure to fall.

“There is also a symbolic aspect to the taking down of the smokestack for many, as it represents something of a final door-closing on a bygone era of legacy ‘smokestack’ industries such as textiles, furniture, etc. that are not coming back in a 2020’s economy,” Hurt Mayor Gary Poindexter said.

The town of Hurt wouldn’t be what it is today without Klopman Mills, as many area houses and buildings were built and funded with incomes from the mills, Poindexter said.

“Hurt exists because of this,” Harris said, as he smoked a cigarette and surveyed the remnants of his former employer.

Standing with friends at the border of the site, Timothy Dudley, who was recently sworn in as the county supervisor for the Staunton River District, expressed the sadness of losing one of the last artifacts of a company that employed so many for several decades.

“Most everybody in Hurt, Virginia, had someone in their family that worked here,” he said.

While the mood was of nostalgia among those observing, there was also a feeling of excitement.

Klopman Mills opened in the 1940s as a small manufacturer, but it was then bought by Burlington Industries in the 1950s. At its peak, the company employed about 1,300 people.

Hurt Partners LLC, of Charlotte, North Carolina, paid $750,000 to Apparel Fabrics Properties in late 2016 for 604 acres of the site. The company has put in the investments to improve the property and is funding the demolition of the smokestack, Rowe said.

In the coming months, vegetation and debris will be removed and improvements to the road and grading of the site will be made, Poindexter said. The removal of this smokestack and silos and general improvements to the site are both important for attracting a 21st century employer and providing jobs to Southside Virginia, Rowe said.

“We have to release the past and embrace the future, and this event can be seen as one step, albeit relatively small, in that direction,” Poindexter said.